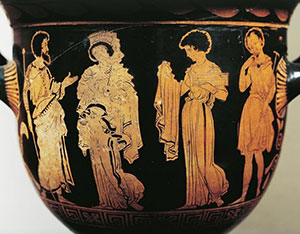 Creusa gets her new magic dress from a slave

Who wrote the Greek play Medea?

The Greek playwright Euripides wrote it in Athens, in the late 400s BC. It’s about the opposition, the agon, between Greeks and barbarians, where the Greeks are rational, controlled people, and the barbarians are irrational, passionate, unthinking. In this way, the play confronts Greek ideas about nomos and physis.

Who was Euripides?
What are nomos and physis?
What is an agon?
Greeks and barbarians
More Greek literature
All our ancient Greece articles

When does the play take place?

The play takes place in the years just before the Trojan War, before the action of Phaedra. If we were to try to place it in history, it would be about 1300 BC.

Medea and Jason in Corinth

The play deals with the later part of Jason’s story, after he went and got the Golden Fleece and after Medea visits Pelias. Jason and Medea had settled in the Greek city of Corinth, and when the play opens they have been living in Corinth for some time, long enough to have had two little boys, maybe six or seven years. So this must be about ten years after the Trojan War ended. Odysseus is still on his way home to Penelope.

Jason and the Golden Fleece
Pelias and Medea
Where is Corinth?

At this point, the king of Corinth, Creon (KREE-on), asks Jason to marry his daughter, Creusa (kray-OO-sa). Creon has no sons, so if Jason marries Creusa he will be the next king of Corinth. Jason says yes, he will marry Creusa. 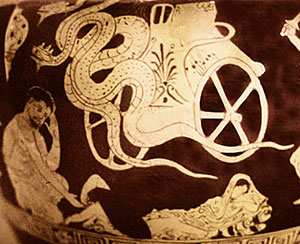 Medea flies away, while Jason mourns his dead children

When Medea finds out that Jason is going to marry Creusa, she is very angry. After all she killed her brother to help Jason, and he carried her off from Colchis with him, and he has been living with her for years, and they have two children together. She thought they were married (the Greeks have no marriage ceremony). She tells Jason how angry she is, but he says well of course they were never married: how could he, a Greek, be married to a barbarian like Medea? Greeks only marry other Greeks.

What does Medea do about it?

She gets even more angry than she was before. She makes a beautiful magic dress for Creusa, and sends her little boys to bring it to Creusa. When Creusa puts on the dress, though, it suddenly turns into fire and burns her up. Medea then kills her little boys, saying that if she can’t have them, Jason can’t either. Jason is very sad, and Medea leaves in a chariot drawn by dragons.

Where she went next
More about Euripides

Bibliography and further reading about Medea and Euripides:

Medea, edited by James Clauss and Sarah Iles Johnston (1996). A collection of essays by specialists about the meaning of the myth of Medea.