Golden Fleece – Jason and the Argonauts 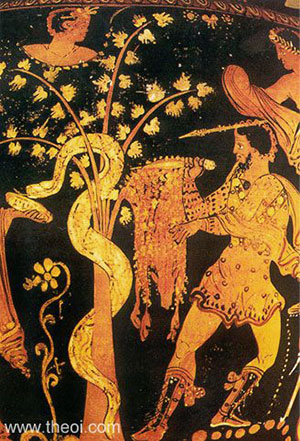 Jason and the Argonauts: Jason gets the Golden Fleece

Just as Jason was being born, his evil uncle Pelias overthrew his father and became king. Jason’s mother hid him, and when he grew up, he came back and demanded his throne. Pelias agreed to give back the kingship, but first, he said, Jason should go on a quest to get the Golden Fleece, a sheepskin full of gold.

Does that sound like a weird thing, a sheepskin full of gold? Apparently some people at that time put sheepskins in streams where there was gold dust, and the gold would get caught in the sheepskin, kind of like panning for gold. So possibly there really were sheepskins full of gold up north of Greece.

Where do sheep come from?
History of gold
More Greek myths
All our ancient Greece articles

Jason and the Argonauts

So Jason set out on a ship, the Argo, with some other adventurers, the Argonauts. (Argonauts just means the people who sailed on the Argo.) After various adventures, Jason and the Argonauts reached Colchis (on the other side of the Black Sea). There Medea, the king’s daughter, fell in love with Jason. She agreed to help him get the Golden Fleece if he would take her with him when he left (like Ariadne and Theseus).

Medea and the Golden Fleece

Medea gave Jason various magic tricks so he could overcome dragons and soldiers and get the Fleece. As they were running back to his ship, Medea kept her father from catching them by killing her brother and scattering bits of his body in her father’s path. (This is kind of like Atalanta‘s story but much creepier.) You can see this isn’t going to end well.

Atalanta and the Golden Apples

Did you find out what you wanted to know about Jason and the Argonauts? Let us know in the comments!

Learn by doing: find a sheepskin at a store and check it out
More about Medea and Jason

Bibliography and further reading about Jason and the Golden Fleece: