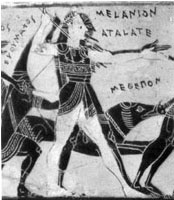 Atalanta (see her name misspelled on the vase?)

Atalanta was a woman who was very good at all kinds of sports (in the story; this is a story). She was a fast runner and a sharp-shooter and a strong wrestler and a great huntress.

A prophecy about marriage

An oracle told Atalanta that she would be ruined if she got married, so she didn’t want to get married. Atalanta said she would only marry a man who could beat her in a race. And if she won the race, she would kill the man who lost.

Many men came and raced Atalanta, but she beat all of them easily, and killed them one after the other. Then Hippomenes came to race Atalanta, and they fell in love. Atalanta begged Hippomenes not to race her, because then she’d have to kill him, but Hippomenes was determined to get her to marry him.

Aphrodite and the golden apples

Hippomenes prayed to Aphrodite to help him win, and Aphrodite told him how to win with three golden apples that she gave him.

Where do apples come from?

During the race, Hippomenes threw down one of these golden apples from time to time, and Atalanta thought they were so cool that she stopped to pick them up, and so Hippomenes was able to win the race and marry Atalanta.

Learn by doing: footraces
Another story about golden apples

(Compare this story to the Central Asian story of Barchin.)

Bibliography and further reading about Atalanta: