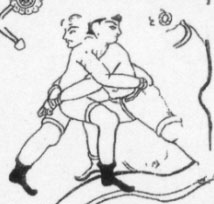 People in Central Asia played games that helped them get better at skills they would need in their lives. They needed to ride horses well, so they liked to race their horses or play games like polo on their horses, where you rode horses and tried to use long sticks to hit a ball into a goal (like field hockey on horses).

People in Central Asia also needed to be good fighters. They liked to wrestle to get better at hand to hand fighting. People wrestled especially during the festival of Naadam, in late July or early August. In Mongolian wrestling, you fought in any open grassy area. You won when you got your opponent to touch the ground with his upper body or elbow (or, in some versions, any part of his body except his feet).

People also held archery contests, shooting with a bow and arrow at targets. Both men and women competed in these games; one example is the story of Alpamysh and Barchin.

In Russia, in the western part of Central Asia, people also used snowshoes and wooden cross-country skis both to get around and for fun. People also played games in the snow like building snow forts and skating on the ice on wooden skates or skates made from animal bones.