Central Asian people played a lot of active games, but they also played games sitting down. Because Central Asian people spent a lot of time herding cattle and sheep, their most popular games involved small animal bones, mainly vertebrae, and the games were like the American game of jacks, or knucklebones. (Kids also played knucklebones in ancient Africa, ancient Greece and medieval Europe). Another game kids played with bones was to line up the bones and toss another bone at them to try to knock them over, like miniature bowling.

Dice made from knucklebones (Thrace, ca. 400 BC)

Central Asian people also played games with dice; the oldest die in the world comes from the Indus Valley, in Pakistan. A lot of these games were gambling games. Dice and knucklebones were convenient games for people who spent a lot of their life riding horses and traveling around. You could keep them in a little bag tied to your waist. 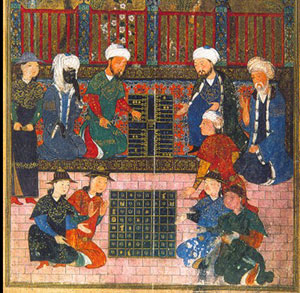 But slowly Central Asian people started to settle down in cities too, and then they played more regular board games. By the time of the Silk Road, about 200 BC, people in Central Asia played backgammon and checkers. Chess was invented a little later, probably also in northern India or Central Asia, and it became very popular there. Chess is still very popular all over Central Asia today, from Russia to China.