Empress Longyu – leading up to the Republic of China

Empress Cixi of the Qing Dynasty in China died in 1908 AD, and her niece, Empress Longyu, took power. Longyu had been married to the Guangxu Emperor, but he was also dead, and they had no sons, so Longyu ruled in the name of her nephew Puyi.

Earlier Qing Dynasty
The Opium Wars
All our China articles

But everyone knew the Qing Dynasty’s army was lame, and everyone was tired of waiting for the Qing rulers to bring democracy and modern times to China. Only three years after Longyu took power, there was a revolution. Like many democratic revolutions, it transferred power from women back to men. 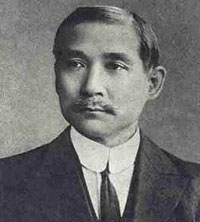 Who was Sun Yat-Sen?

The Republic of China and World War I

But the new Republic of China was too weak to keep power, and there was a lot of civil war. After seeing how horrible World War I was, and how badly Europeans and Americans treated the new Chinese Republic, by 1919 Chinese leaders didn’t think European and American ideas were so great anymore. In Russia, they had just had a Communist revolution, and the ideas of Lenin and Trotsky looked more exciting.

What was World War I?
The Russian Revolution 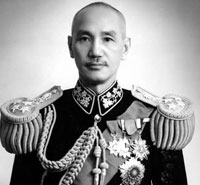 Who was Chiang Kai-Shek?

Then in 1931 Japan, thinking that China was very weak, invaded China. This turned into World War II. Everyone in China was busy fighting the Japanese until 1945. When Japan lost World War II, the Japanese army had to leave China, and right away Chiang Kai-Shek and the Communists started fighting each other again. 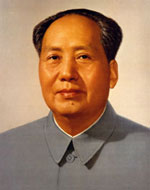 But this time, the Communists were stronger and they won. The leader of the Communists was Mao Zedong. Mao called his new government the People’s Republic of China. Like Empress Cixi and Sun Yat-Sen, Mao also wanted to modernize China. Mao’s government was strong enough to force China to modernize. Like Russia, Communist China tried to get women equal rights with men.

History of women in China

How did China get modern factories?

With the help of Russia, Mao forced China’s factories to make modern weapons and tools. Russia showed China how to make modern steel so they could finally build railways. Mao forced farmers in China to use tractors and combines. But it was hard for the government to get everything right. Sometimes they made bad choices. Millions of people in China starved to death. But Mao did make China into a powerful, modern country. Nobody would be able to invade China anymore. 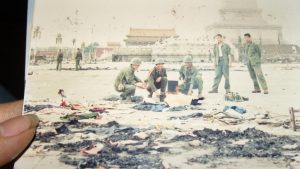 Tiananmen Square soon after the soldiers shot the protesters.

After Mao died in 1976, China’s government allowed people to make more choices for themselves. People could own their own farms again.

But when people protested that they wanted democracy, in 1989, China’s leaders sent the army to shoot thousands of protesters in Tiananmen Square. So China didn’t get democracy.

Today China is a powerful country with modern cities. China makes about half of the world’s steel and glass, and produces a lot of the world’s cotton clothing too.

But it is still not a democracy. And almost three out of four people in China still live pretty much the same way they did hundreds of years ago, farming small farms with oxen or with their own hands and eating mostly millet or rice or sweet potatoes.