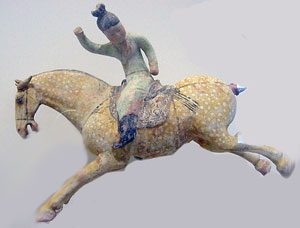 China has always been influenced by the cultures to its south – India and Southeast Asia – where women have little power, status, or freedom. But China has also been influenced by the cultures to its north and west in Central Asia – the Uighurs and the Mongols. Those women, while not the equals of men, have traditionally had more power and more freedom. These two traditions meet in China, so the situation of women in China was complicated and changing.

Like women in India, most Chinese women had to leave their own families when they got married. Married women had to live with their husband’s parents, who often abused the young wives and treated them like servants. Women often got less meat, and more beans, than men did – less millet, and more barley – and less food in general. More women went hungry than men.

Women in Chinese households did the cooking and spinning and childcare, and also often worked in the fields. If all their babies were girls, their husbands blamed them and they were treated even worse. People also blamed mothers if their baby was born with physical challenges. Many women were enslaved, and had no rights at all. In some parts of China almost all slave and free women worked making thousands of bolts of silk, so traders could sell it on the Silk Road. (Compare West Asian and European slave women producing wool.) 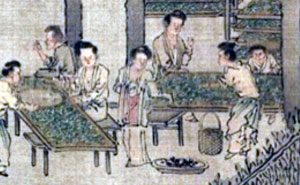 Did women in China have any political power?

Under the Han Dynasty (200 BC-200 AD) women like the Empress Lu found it hard to get political power, though they tried (compare the story of Agrippina). But as Central Asian influence grew in the Early Middle Ages, women got more power all across Europe and Asia, and China was no exception. Women went swimming and became dancers and acrobats. Many Buddhist women became famous and powerful, running monasteries or donating money to them. In the late 600s AD, the Empress Wu controlled China, and in the 700s Xue Tao published poetry.

On the other hand, clothing fashions for rich women started to force women into uselessness and helplessness, with extra-long sleeves that covered their hands so they couldn’t do anything. And Qingming ceremonies honored only the father’s ancestors, not the mother’s.

Why did women in China bind their feet?

By the late 900s AD, upper class women in Southern China were beginning to bind their feet. The practice slowly spread northward. By the 1100s, nearly all Chinese girls had their feet bound; only the very poorest women who had to work in the fields kept normal feet. Possibly foot-binding was a way to keep girls sitting down, to force them to spend more time spinning and weaving cloth for the family to sell.

When Kublai Khan made China part of the huge Mongol Empire in the 1200s AD, many Chinese women began to wear pants, like Central Asian women. Southern women kept on binding their feet, but many northern women, especially Central Asian women, did not – both because the Manchu made foot-binding illegal, and because northern families didn’t sell so much cloth.