Ancient Roman people – who lived in the Roman Empire?

People of minority races or cultures probably were more comfortable under the Roman Empire than they were before or after. There were people of so many different cultures travelling around the empire interacting with each other that there seems to have been a lot of tolerance for other cultures. On the other hand, this contact did also cause tension. Sometimes that tension burst out into violent persecutions of minority groups. 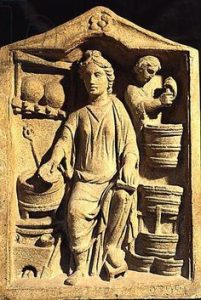 A woman pharmacist and her enslaved assistant

People were forced into slavery in every corner of the Roman empire, from the beginning to the end. But again the kind of slavery and the way enslaved people were treated depended on where you were and also on when. In Italy and Sicily, and maybe in some other places, big farms were worked by slave field-hands, who were very badly treated.

Other slaves were house servants, like nannies, nurses, cooks, laundry-women, and stable-boys who took care of the horses. A lot of enslaved people also worked for the Roman government, or for private businesses, as managers, or running a shop, or in small factories. Still other enslaved people were criminals who had been sentenced to work in the mines or other hard labor as punishment. Even if they were freed, people who had once been enslaved still didn’t have the same rights as other people, but their children did, if they had been born free.

All over the Roman empire, many boys in cities probably went to school. Some girls went too, but most girls were not allowed to go to school. Out in the countryside, in small villages, probably hardly anyone could read or write. Very few people went to college, but those that did often travelled far from home, to Athens or Alexandria in Egypt, for a good education.

Partly at school, and partly through their families or just playing ball games outside, kids all over the Roman empire did have lots of friends. Girls and boys from rich families, however, were not allowed to get romantic together. Most marriages among the upper classes were arranged by the parents. It was probably different, and more like today, for the poor.

Learn by doing: do you go to school? why, or why not?
More about Roman schools