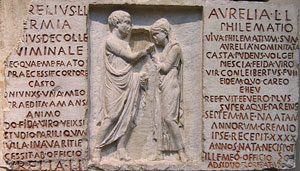 Roman freedmen – A gravestone for a freedwoman, put up by her husband, who was also a freedman (ILS 1221, Rome, 80 BC)

What are freedmen and freedwomen?

Freedmen and freedwomen were people in ancient Rome who had once been enslaved but had managed to get legally free.

How did they get free?

Sometimes enslaved people were freed because they were getting too old to work and the people who owned them didn’t want to have to take care of them anymore. Owners often set nannies and wet nurses free, for instance, when the children they were taking care of grew up.

What is a wet nurse?
The Roman economy
Roman government

Sometimes enslaved people saved up enough money to pay for themselves and buy their own freedom. Or they might get their freedom because they had done something especially useful for their owners, out of gratitude.

Most of the people who became freedmen worked as servants for rich people, or they worked for the Roman government – the field workers on big farms were much less likely to get their freedom. They just worked hard until they died.

Were they completely free?

Freedwomen and freedmen still had to do what their ex-owners told them, and had to work for them for free if their owners wanted them. Freedwomen could not refuse to marry the men who had once owned them, even though they were free now. And freedmen could not hold important political and religious positions, though their children could.

Could freed people get ahead?

Yes, in spite of their disadvantages, we do hear of many ex-slaves eventually becoming independent and even wealthy. The famous playwright Terence had been a slave, for example. Often freedmen opened stores, or ran small businesses. Sometimes they bought farms. Many freedmen owned slaves themselves. And some freedmen actually got pensions from their former owners. Pliny the Younger bought a small farm for his old nanny to retire to.

Who was Terence?
Pliny the Younger
Tiberius and Sejanus

During the Julio-Claudian period, some of the most powerful men in the empire were actually freedmen. Sejanus is one example. The emperors felt they could trust these men more than they could trust senators and other rich men they knew.

Rich white people even called African-Americans “freedmen” and “freedwomen”. So they felt entitled to demand respect and service from the freed people. They didn’t treat them like equals, or like citizens. They used the Romans as an excuse to break the law and treat African-Americans badly.

Learn by doing: how are freedmen like retired people today? How are they different?
More about Roman slavery