What is lead? A heavy kind of metal 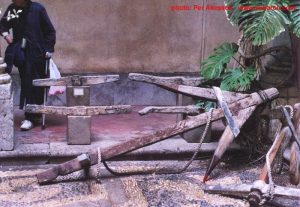 History of lead: A Roman anchor from Palermo, Italy

What did ancient people use lead for?

Lead is a kind of metal that is very heavy. (See if you can get some lead, like a fishing weight, to see how heavy it is). People have been mining lead and using it for weights in West Asia since about 4000 BC, about the same time people started to use copper, and before they invented bronze. One early use of lead was probably for spindle whorls. Early Chinese bronze, about 2000 BC, mixed copper and lead instead of (or in addition to) tin.

Chemistry of lead
What is copper?
When was bronze invented?
Chemistry of metals
All our chemistry articles
History of science 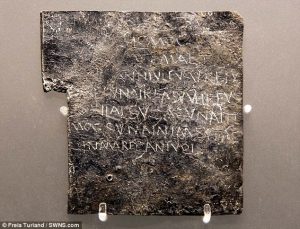 History of lead: A lead curse tablet from ancient Rome

Lead in antiquity and the Middle Ages

Lead is pretty common all over Europe and Asia, and people used lead for all kinds of things throughout antiquity and the Middle Ages. Lead is very soft so it is easy to make things out of it. You used lead  to mend broken pottery, and for water pipes. People also used lead to clamp building stones together, inside stone walls. Roman dentists used lead to fill teeth with cavities in them, but only so the teeth would hold together while the dentist was pulling them out.

Sometimes people wrote curses on little pieces of lead and dropped them into wells (so evil spirits (who lived underground) would get back at their enemies). Lead is soft and easy to work, so it was very useful. 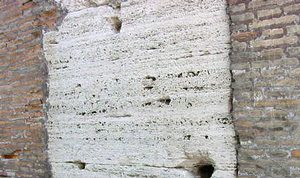 History of lead: Part of the Colosseum in Rome, with the lead clamps removed for reuse.

The biggest problem with lead is that it is also poisonous. People knew this in ancient Greece and Rome, just as we know it today. They could see that when people who were enslaved were forced to go into lead mines, they got sick and died in two or three years from breathing the lead dust. Greek and Roman doctors and scientists wrote about how lead was poisonous. And that’s why rich people made slaves go into the mines – free men and women wouldn’t do it.

The silver/lead mines at Laurion

…and the fall of Rome?

You may have heard that lead poisoning caused the fall of Rome? That’s certainly not true. Roman people did use lead water pipes, and this did put some lead in their drinking water, but not enough to be really harmful. And they did use a little lead powder to sweeten their wine, but again, it’s not enough to make a difference. To get lead poisoning from this wine, you’d be drinking so much wine that the alcohol would be your main problem. In any case, they drank both the water and the wine for hundreds of years before the Roman Empire collapsed, so we can not blame lead poisoning for the fall of Rome.

What did cause the fall of Rome?
Roman wine and wine-making
Roman water supply

In the Middle Ages in Europe, people used to go to the old Roman buildings and dig the lead clamps out from between the stones, because recycling and reusing the lead clamps was cheaper (and a lot safer!) than mining lead out of the ground. You can still see the holes in many Roman buildings, like these in the Colosseum at Rome.

What is the Colosseum?

People used lead in many of the same ways in South America. The Inca used polished galena to make mirrors. They, and their neighbors, used lead to make weights and possibly also to repair broken pottery. As in China, the Aztec mixed copper with lead to make bronze. They used this bronze, and lead in general, mainly to make decorations and as a kind of money, not to make tools.

Native American use of lead

By this time, people in North America were also mining and using lead. Cahokia, where the Missouri river meets the Mississippi River (at modern St. Louis) was probably a big center of galena production and trade. Native Americans used powdered lead ore (galena) because it was shiny, for makeup and in their artworks. They also made beads out of lead ore. Native American fishing weights, though, were carved out of stone.

This article still needs work to be global: people were using lead in Africa, India, and Indonesia as well, but we’re still working on that part.

Bibliography and further reading about the history of lead: