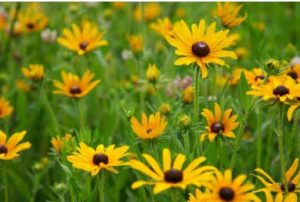 Black-eyed Susan (the black in the middle is the seeds)

Before people had any idea why anything happened, or how, they could at least find out what happened. People watched plants grow. They watched animals grow. They saw milk turn into cheese and flour turn into bread, Astronomers watched the sun come up and the stars and planets go around, and the seasons change. So they figured out a great many things about what happened. In fact, people of the Stone Age probably knew more about what happens in nature than you do, because that was more important for them than it is for you.

We often think today that people who lived a long time ago did not understand what makes plants grow, or where babies come from. But this is really not true. Anthropologists have never found any people on earth who didn’t know both of those things very well. Anybody who looks around her will see that plants grow where seeds or spores fall on the ground. They’ll see that babies come from a mother and a father. 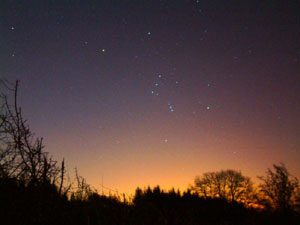 Constellation of Orion; thanks to Douglas Cooper

Another form of observation was the development of counting. As far back as the Paleolithic (Old Stone Age), about 35,000 years BC, people were carving marks on sticks. The marks helped them remember how many bags of fruit were in that basket or how many people were in the band. The Sumerians, about 4000 BC, were probably the first people to develop a way of writing numbers down more efficiently.

The Egyptians and the Babylonians were both very accurate and interested observers of natural phenomena. They identified and named the different constellations of stars. Egyptian doctors observed how cancers grew, and how your pulse and your heartbeat were connected. Mathematicians also observed less obvious things, like the Pythagorean Theorem.

The Greek philosopher Aristotle brought the Greek interest in bringing order to the natural world to scientific observation, in the 300s BC. He tried to organize all of nature into a system that made sense, putting similar things together into categories. Aristotle got his friend Alexander the Great to send him back samples of new plants and animals that he found on his military campaigns, from as far away as India. 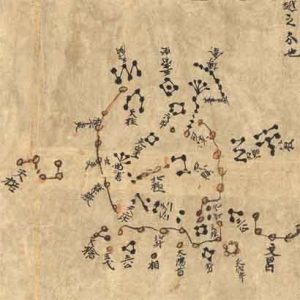 Chinese star chart possibly dating from the 600s AD, during the T’ang Dynasty

Not long after Aristotle came another Greek observer, a doctor named Hippocrates. Hippocrates made many observations about sick people. He and his students wrote down what they observed, and their ideas about what it meant. In Egypt, doctors like Herophilus identified the optic nerve. And in China, doctors wrote the Neijing – their observations that exercise, good food, and clean air keep people healthy. Chinese astronomers drew the world’s first star chart. They learned to predict eclipses too.

In the time of the Roman Empire, around 70 AD,  Pliny the Elder collected masses of information into his Natural History. Mostly he wanted to show how big and powerful the Roman Empire was, that it had all these things in it. 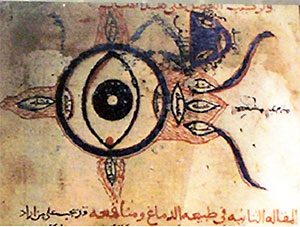 A Roman doctor named Galen also added a great deal to Hippocrates’ observations. Ptolemy drew one of the first world maps. In India, Charaka observed and described smallpox and other diseases, and Arya Bhata observed and recorded the movements of the stars and planets.

In the Islamic Empire, from 700 AD on, people were very interested in scientific observation. Some people were interested in plants. They copied the Roman works while adding any new information they could find. Others, like Ibn Riza, Maimonides, and Ibn al-Nafis, were doctors. They added a lot of new observations (and also treatments) to those of Galen. In Central America, Mayan astronomers were also beginning to be able to predict eclipses. In India, in the 1400s AD, Lakshmana Pandita also added new observations about dysentery, miscarriages, fevers, epilepsy, and kidney stones, as well as other diseases.

Observation
Logic and the Scientific Method
Practical Engineering
Where does God fit in?