Science and the gods – History of Science

Gods are part of people’s desire to know how the world works. It’s one of the ways that people explain how the world works. People say that God or the gods make this happen. Or you could say that the gods are a way of talking about complicated things that happen. Maybe they’re hard to understand or hard to talk about. So people talked about those things in terms of gods. 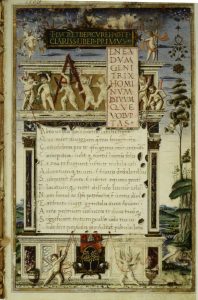 In the ancient and medieval worlds, nobody, not even scientists, seems to have seriously thought that there might not be any gods. Everybody believed in at least one god. Everyone believed that the discoveries people made through observation and the logical systems they thought of could work with the idea of gods. People disagreed about which gods, and about what exactly the gods wanted, but nobody questioned that there were gods.

Because of their faith, people were not afraid to apply their observations and their reasoning to thinking about the gods. They used logic and observation to try to find out who the gods were and what they wanted. The Sumerians observed the stars, and organized them into the twelve signs of the Zodiac. The Greek Plato wrote about the nature of the soul, and how you could figure it out logically.

The Roman Lucretius wrote a long, logically constructed book about how the gods acted toward people, and why, which also includes a lot about the theory of atoms. Around 420 AD, the great Christian writer Augustine also used Aristotelian logic to work out what God’s plan was, and why God had allowed the Visigoths to sack Rome.

With the rise of the new religion of Islam in the 600s AD, many scientists living in the Islamic Empire also tried to work out the relationship between Aristotle’s science and the Quran. About 1050 AD, Al Ghazali supported a clear division between mathematical and astronomical ideas, which you could prove, and religious ideas, which were in a different category. Ibn Rushd, about 1150 AD, wrote a book in opposition to Al Ghazali, explaining how Aristotle’s ideas could work with the Quran after all.