Abraham and the Jews – Bible stories 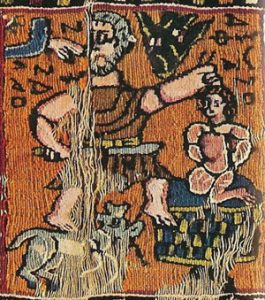 Shortly after the episode with the Tower of Babel, the Bible tells us that some of the Jews decided to leave Mesopotamia where the Sumerians were, and travel further west towards Canaan and modern Israel.

What’s the Tower of Babel?
More about the Jews
All our West Asia articles

Why did the Jews leave?

The Bible says this is because God told them to. Also, this was a bad time in Mesopotamia, with both invasions and environmental problems, so maybe it seemed like a good time to leave.

The Jews went to Canaan

They left Uruk and went to Canaan, which is modern Lebanon and Syria. And then there was a drought in Canaan (not enough rain) and so the Jews moved on to Egypt, where they could find work to support themselves through the drought. This would be about 2000 BC.

Why does it rain?
Egypt in the Middle Kingdom 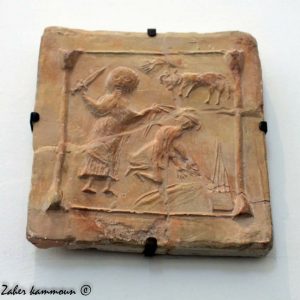 When the drought ended, the Jews moved back to Canaan, where they established themselves as nomadic shepherds.

History of sheep
Wool and cloth

This part of the Bible has several stories about how cities are evil, and nomads are pure and good, like the story of Sodom and Gomorrah (compare this attitude with that found in the Epic of Gilgamesh).

Sodom and Gomorrah
The Epic of Gilgamesh 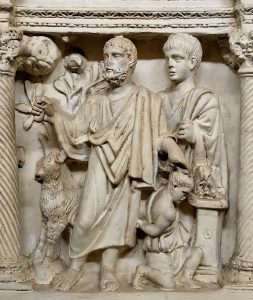 Abraham and Isaac again, from the sarcophagus of Junius Bassus, Rome, 359 AD (now in the Vatican).

Should the Jews do human sacrifices?

In Canaan, the Jews started to mix with the local people, the Canaanites, and they noticed that the Canaanites practiced human sacrifice: they killed people (usually babies) in order to please their gods.

Now this was not what the Jews did: the Jews usually sacrificed sheep for their god. Some of the Jews seem to have started to think that maybe it would be better to sacrifice people. More impressive, anyway.

The story of Abraham and Isaac

In the story of Abraham and Isaac, the Bible makes it plain that God does not want human sacrifices. God appeared to Abraham and told him to sacrifice his son Isaac to God. Abraham was very sad about this but he agreed, and so did Isaac. But at the last minute God said, “No, stop! I was just testing to see if you would do it. I don’t really want you to.” And God told Abraham to sacrifice a sheep instead.

Compare this story to similar stories in other cultures that end differently:

Learn by Doing – a discussion about different cultures

Go on to Joseph
More about Judaism
Quatr.us home