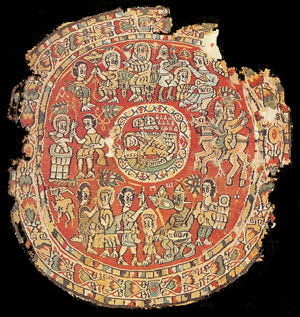 Joseph dreams and gets put in the well, then talks to Pharaoh (Egypt, 500s AD, cloth)

Who was Isaac again?

According to the Bible, Isaac was the son of Abraham and Sarah. Isaac married Rebecca. And they had two sons, Jacob and Esau (EE-sow).

And Jacob married two women (this was allowed then), Rachel and Leah, who were sisters. Jacob and Leah had many sons. And then Jacob and Rachel had two sons, Joseph and Benjamin. But Jacob loved Rachel’s sons best, because he loved Rachel best. Jacob made Joseph a fancy wool coat. The other boys were all jealous. Then Joseph made things worse by telling them a dream. Joseph had dreamed that someday his brother and even his parents would bow down to him.

The story of Joseph

All these people were nomads and shepherds. (The story’s set around 1300 BC.) So all the boys were out one day tending the sheep, when the older ones decided to get rid of Joseph. They threw him in an empty well. And when some slave traders came by they sold Joseph to the slave traders.

Slavery in West Asia
History of slavery
Where do sheep come from?

The slave traders took Joseph to Egypt and sold him to the Pharaoh’s captain of the guard, to be his slave. The captain’s name was Potiphar (POT-ih-far). Joseph worked hard, but he got into trouble anyway. Potiphar’s wife fell in love with Joseph. When Joseph told her to go away and leave him alone, she lied to Potiphar and told him that Joseph had raped her. (Men told this story so that people wouldn’t believe women’s rape stories. Compare the Greek story of Phaedra.) So Potiphar threw Joseph into prison.

Egypt in the New Kingdom
Who was Phaedra?
Women in West Asia

When Joseph was in prison, he interpreted a dream for the Pharaoh, because everyone knew he was good at interpreting dreams. He did so well that the Pharaoh let Joseph out of prison and made him the main advisor of the Pharaoh, and not a slave anymore. Soon he married the daughter of the Priest of On. It’s a story that shows how women’s accusations make no difference to men’s privilege and power. But it’s also a story about the problems of immigrants.

The Pharaoh in Egypt
Egyptian religion
The Jews and Egypt

A few years later, there was another drought in Israel and Canaan, and the Jews did not have enough to eat. Joseph’s bad brothers came to Egypt looking for food, and Joseph gave it to them. Finally after testing them he told them who he was, and forgave them. They were really sorry. Then Joseph and all his brothers and his father Jacob lived in Egypt for many years, and so did their children and their children’s children.