The Jews and the Levant – West Asian history 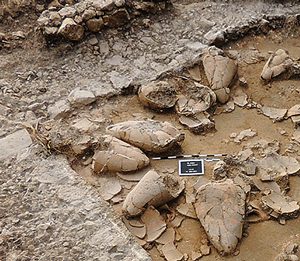 Jews and the Levant: Tel Kabri, a Canaanite palace ca. 1600 BC

When we first meet them…

By the end of the Stone Age, the people who would eventually become known as the Hebrews, and then the Jews, were mostly settled down in villages, farming, though some of them may have been nomadic shepherds like Abraham and Isaac in the Bible.

Abraham and Isaac
Stone Age West Asia
History of farming
Where do sheep come from?
Stone Age timeline
All our West Asia articles

During the Bronze Age, the people living in Israel, like their neighbors in Mesopotamia and Egypt, began to have kings and cities. By about 2000 BC, the kings lived in big palaces with thick stone walls, and had slaves who cooked for them and took care of their huge wine cellars. The kings hired Minoan artists to come from Crete and decorate the walls of their palaces (or maybe they hired local artists to copy Minoan work).

Egyptian temple to Hathor at Serabit in the Sinai

As the Bible’s stories about Joseph and Moses suggest, these Bronze Age people traveled back and forth to Egypt a lot, both as traders and to find work. Some Hebrews were working for the Egyptians as turquoise miners at Serabit in the Sinai Desert about 1800 BC when they invented the alphabet.

Joseph and Egypt
Moses and Pharaoh
Who invented the alphabet?
Egypt in the Middle Kingdom

Around 1500 BC, the Egyptian New Kingdom pharaohs conquered, or at least dominated, most of the Mediterranean coast as far as northern Lebanon and Syria. Like their Phoenician neighbors, the people of Israel lived under the control of the Pharaohs, probably paying tribute every year.

Egypt’s New Kingdom
Who were the Phoenicians?

The relative peace and safety brought by the Egyptian empire made everybody richer, though their kings resented being conquered. But around 1200 BC, the Egyptian Empire collapsed, and the Jews found themselves independent again.

When the Egyptians took over Israel during their New Kingdom, about 1500 BC, the Jews who were living there must have learned a lot about a more advanced culture than theirs. According to the Bible, the Jews before this time were mainly shepherds like Abraham or Joseph or Moses. That’s not really right: we know from archaeology that there were already palaces and big farms in the Levant in the Bronze Age. But probably the cities of the Levant did get bigger and more complicated under Egyptian influence.

The Iron Age in Israel

But when the Egyptian New Kingdom collapsed, about 1200 BC, the Egyptians lost control of Israel, and the Jews found themselves politically independent again. They seem to have been very happy to get free again, as we see in the Bible stories of Moses and Joshua.

But even though they were free now, the Jews had still learned a lot from the Egyptians. More of them were farmers now instead of shepherds. And they were used to kings, and armies.

Who was King David?
Who were the Philistines?

Pretty soon, they picked kings of their own: King Saul and then King David. And they organized armies of their own to fight the Canaanites (basically the Phoenicians) and the Philistines.

Did you find out what you wanted to know about the Jews and the Levant? Let us know in the comments!

Learn by doing: how does the story of Joseph match up with the palace at Tel Kabri?
The Kingdoms of Israel and Judah

Bibliography and further reading about the early history of the Jews: