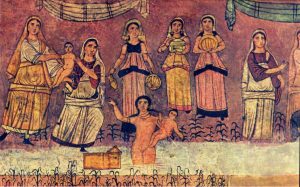 The Pharaoh’s daughter picks Moses up out of his basket (synagogue at Dura Europos, Syria, 200s AD)

The Book of Exodus

According to the Book of Exodus in the Bible (“Exodus” means leaving, because this is the book about the Jews leaving Egypt), the Jews did very well in Egypt after Joseph brought them there.

Over the years, there got to be a lot of Jewish people living in Egypt around 1200 BC.

A new Pharaoh came into power in Egypt

But then the old Pharaoh died, and a new Pharaoh came into power, who “knew not Joseph.” According to the story, this new Pharaoh, Rameses, didn’t like the Jews.

(More about slavery in Egypt)

Why did Moses’ mother put him in the river?

Then this bad Pharaoh decided to kill off all the boy babies of the Jews. Everyone was very upset! But one mother saved her baby (according to the Bible) by putting him in a basket made of reeds and putting him in the Nile river to float away.

(Compare to the older story of Sargon)

His older sister Miriam watched as he floated, and saw what happened. 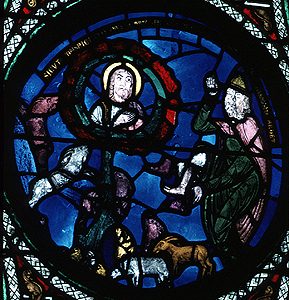 Moses talking to God in the burning bush, from the church of St. Denis, about 1140 AD

Later that day, the Princess (the Pharaoh’s daughter) came down to the water to take a bath with her slaves.

She saw the basket and made her slaves get it for her. When she saw the baby she knew that he was a Jewish baby and was supposed to be killed, but she took him home anyway.

She called the baby Moses, because that means “Saved”, and she had saved him. And his sister Miriam came and offered to find a wet nurse to take care of Moses, and the Princess let her. Of course she went and got Moses’ mother, so the mother got to take care of her baby son after all!

When Moses was grown up, he saw an Egyptian hitting a Jew. This made Moses mad. He hit the Egyptian and killed him. Then he had to run away, because he had killed a man.

Moses and the burning bush

Moses ran to the desert, towards Libya, to the west of Egypt. There he became a shepherd. One day when he was taking care of the sheep, he saw a bush that was on fire, but then when the fire was out, the bush was still there, not burnt at all! Moses thought that was weird and went closer for a better look.

(More about the Egyptian desert)

When he got close,he heard a voice saying, “Stop and take your shoes off, for this is sacred ground.” He heard God talking to him, and he heard God tell him to go and help the Jews get free from the bad Pharaoh.

So Moses went back to Egypt and he asked Pharaoh to let his people go. Pharaoh said no. Then God sent ten plagues to hurt the Egyptians so that Pharaoh would let the Jews go.

What were the ten plagues of Egypt? 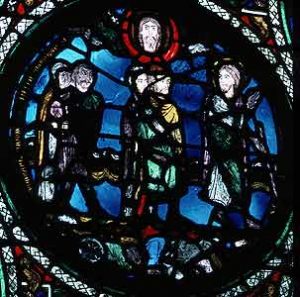 The Jews crossing the Red Sea (also from St. Denis)

The Jews cross the Red Sea

Finally the Pharaoh said that the Jews could go. So they did not waste any time; they left right away. The Bible says they did not even wait for their bread to rise.

The Jews got to the Red Sea and they could not see how to cross it, and then they saw the Pharaoh had changed his mind and come after them! 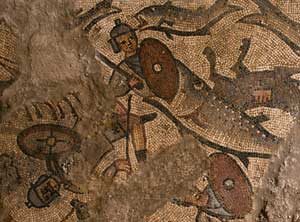 They were screaming, and then praying.

And then God parted the water of the Red Sea for them so they could cross on dry land. When the Egyptians tried to follow the Jews, God drowned all the Egyptians.

Learn by doing: make baskets and float them in a stream

Another version of the Moses story
The Ten Commandments
Quatr.us home