Where did Passover come from? Jewish holidays 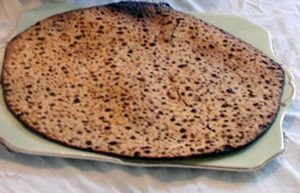 The beginnings of Passover

In its earliest beginnings, which could go back to the Stone Age, Passover was a Jewish spring festival. Like other spring festivals, it celebrated the first barley harvest after the winter.

Why did people eat matzoh?

All winter there had not really been enough to eat. Now in March or so there was finally some fresh new barley bread to eat! People were in such a hurry to eat it that they couldn’t wait for the bread to rise, and they ate flat bread – matzoh.

A recipe for matzoh

What else did people eat?

People also ate other new spring foods at this time. They ate lamb, because the little lambs were mostly born in late February or March, and parsley. They ate eggs, because chickens began laying again as the days started to grow longer.

History of eggs
Where did chickens come from?
History of sheep

This festival is probably related to the Zoroastrian festival of Nowruz, and to earlier Babylonian New Year celebrations. Like them (and like Chinese New Year, Qingming Jie, and Easter), it’s tied to astronomy: Passover is always the first full moon after the spring equinox).

The Babylonian Captivity and Passover

But by the time of the Babylonian Captivity, religious men like Ezra and Nehemiah were not happy with Jewish harvest festivals; they were city people, not farmers, and they wanted more of a connection to God for their holidays. They decided that if Passover was so important, it must be the celebration of a very important event in Jewish history.

What is the Babylonian Captivity? 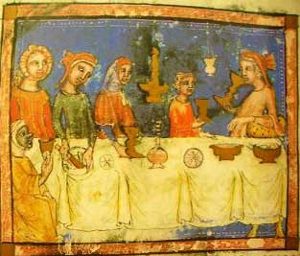 A Seder in the Middle Ages

The beginning of the country of Israel – now that was a really important event! It had happened about 500 years before Ezra and Nehemiah, so nobody remembered it personally, but there were a lot of stories about it.

To make sure that nobody would ever forget how Israel became a country, people started the holiday of Passover. People would still eat matzoh and parsley and eggs and lamb, but they would also tell the story of Moses and how the Jews came to Israel.

The historical basis of Passover

The Jews in the Levant
Egyptian New Kingdom

Passover tells the story of how Moses led the Jews out of Egypt to Israel, but the truth was that the Jews had always been in Israel, only with the fall of the Egyptian New Kingdom they had gotten free and could start their own country. Either way, freedom and independence are something to celebrate, and most Jews still do celebrate them every year, even today.

Bibliography and further reading about Passover: