What is Hanukkah? – Jewish holidays 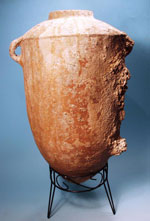 Hanukkah history: a Canaanite amphora, for olive oil or wine (Bronze Age, about 1300 BC)

Like all other farming communities, Jewish people celebrated harvest festivals when important crops were safely harvested and stored. One of these harvest festivals was Passover, in March or April, when the first of the spring barley was ripe. Another was Sukkot, in October, celebrating the fruit harvest.

What is Passover?
What’s Sukkot?
Where does olive oil come from?
More about the Jews
All our West Asia articles

Hanukkah, in December, was a third harvest festival. People celebrated Hanukkah when they finished picking the olive harvest and pressing it into olive oil. 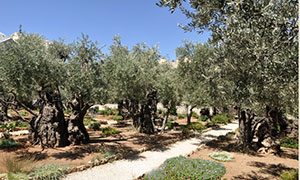 Olive trees (on the Mount of Olives, Jerusalem)

Why were olives so important?

In Israel, olive oil was an important way to get fat to eat. Olive oil was also the main source of fuel for lamps to light the dark winter nights. For thousands of years, what people celebrated at Hanukkah was having plenty of oil to get through the winter. People ate foods fried in oil, like pancakes, to celebrate the festival.

Why do we need fat?
Why does oil burn?
Mediterranean foods
How to make an oil lamp

A festival of light

To make this festival more exciting, it happens that people harvest olives at just about the darkest time of the year, when the days are the shortest. People all over the world have a festival of lights in the late fall or wintertime, like Yule, Christmas, the Roman festival of Saturnalia, the Chinese New Year, the Inca festival of Inti Raymi, or Diwali. Jewish people lit oil lamps at Hanukkah to fight off the darkness. 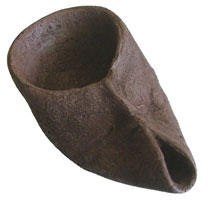 Maccabee olive oil lamp. You pour olive oil in the big hole and stick the wick in the small hole.

The reason for the season

When the Jews returned to Israel from the Babylonian Captivity in 537 BC, some Jewish religious leaders had gotten fancy ideas about what Jewish religion should be like. They wanted people to worship God and only God, as the Commandments said. So they thought this traditional harvest festival was old-fashioned. The priests weren’t farmers. They were city people. What did they care about the olive oil harvest? They looked for a more godly reason for the holiday. At first the reason seems to have been a celebration of the dedication of the Second Temple in 516 BC.

What’s the Babylonian Captivity?
Persians and the Second Temple

In 167 BC, the Seleucid king Antiochus made it illegal to be Jewish in Israel, and sacrificed pigson the altar at the Second Temple. Angry Jews revolted against his rule, and under their leaders the Maccabees (it means the Hammers) the Jews soon regained their independence. In 165 BC the Jews rededicated the Second Temple, and again they held a big party. The party lasted for eight days, possibly because people had not been able to celebrate Sukkot a few months earlier, and Sukkot was an eight-day festival.

Who were the Maccabees?
Hellenistic West Asia

When did the Hanukkah story get going?

Early sources like the Book of Maccabees don’t mention oil, or miracles, but there are many images of branched oil lamps or menorahs. The Gemara, written about 500 AD, connects the olive oil festival, the festival of lights, and the rededication of the Second Temple under the Maccabees.

What is the Gemara?

The Gemara says that when the Maccabees regained control of the Temple, there was only enough olive oil left for one night of the eight-day festival, but God made a miracle so that the olive oil lasted all eight days. Nobody knows who first told this story, or why, but it does make a very neat way of tying together these three different ideas and making Hanukkah less about farming and more about God!

Hanukkah in the Middle Ages
Learn by Doing – Celebrating Hanukkah

Bibliography and further reading about Hanukkah: