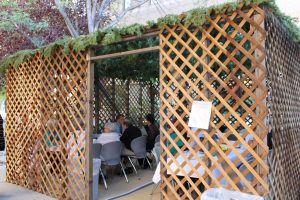 When did Sukkot get started?

People along the eastern coast of the Mediterranean Sea first began celebrating Sukkot probably at least six thousand years ago, when they were beginning to be farmers.

What does Sukkot celebrate?

Like Passover and Hanukkah, Sukkot was a harvest festival. After plowing, planting, pulling weeds, watering, and worrying about whether diseases or storms would wreck the crop, finally in the fall the food was ripe and ready to pick. In ancient Israel, people picked figs, pistachios and almonds around this time. Starting maybe around 1000 BC, they also picked citrons, which are still part of the celebration today.

What is Passover?
What is Hanukkah?
Where do figs come from?
History of almonds
Citrons, oranges, and lemons

Why do people build shelters for Sukkot?

They were so busy picking the food that they didn’t even go home to their villages at night – they slept in temporary harvest huts in the fields. And when they finally gathered all the food, they were so happy that they would have enough food for the year, that they had a big celebration: Sukkot. 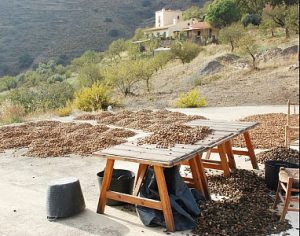 Since everyone got together for Sukkot, it was a good time to make announcements. According to the Bible, Moses told the Jews to read all the laws out loud at Sukkot.

A new meaning for Sukkot

After the Babylonian Captivity, though, celebrating harvest festivals seemed a little old-fashioned, and the priests wanted everything to be about God instead. This was about 500 BC. People kept on celebrating Sukkot by eating food and building little harvest huts, but the priests said it was in memory of the forty years the Jews spent wandering in the desert when they left Egypt with Moses.

Did you find out what you wanted to know about the history of Sukkot? Let us know in the comments!

Learn by Doing – Building a Sukkah
What is Hanukkah?
What is Passover?

Bibliography and further reading about the history of Sukkot:

More about almonds
More about figs
And more about Judaism
Quatr.us home