The people of West Asia traditionally divided themselves into two groups who had very different eating and drinking habits. These two groups thought of themselves as enemies, even though they also traded with each other and married each other all the time. One group lived in the river valleys and on the plains, the flat land, and they were farmers. 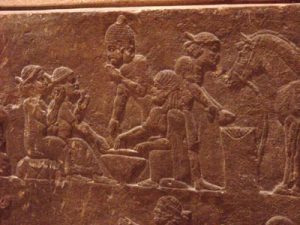 A meal in ancient Nineveh (about 700 BC)

The farmers lived mainly on wheat and barley, made into flat bread (like pita bread or pizza) or porridge. These farmers lived in river valleys and by the coasts, so they also ate a lot of fish. They ate lentils and chickpeas (garbanzo beans), which they made into falafel and hummus. They ate apples and figs and almonds. These valley people drank beer, made out of their grain, and wine, made from grapes.

The other group lived up in the hills, and they were shepherds and goatherds. They ate a lot of cheese and yogurt and roasted mutton, and they drank milk and fermented (alcoholic) milk drinks more than beer or wine. They traded their cheese to the valley people for wheat and barley for their bread, and for beans. Many hill people also gathered chestnuts and acorns from the forests there. And if anything happened to the wheat and barley – a drought or a storm or a war – even the valley people were happy to climb the hills to pick chestnuts and acorns.

Bibliography and further reading about food in West Asia:

The Oldest Cuisine in the World : Cooking in Mesopotamia, by Jean Bottero (2004). A whole history of food, with some recipes (but basically not a cookbook).

Ancient Egyptians and Their Neighbors: An Activity Guide, by Marian Broida (1999). Not just Egypt! Includes simple recipes from the Sumerians, the Babylonians, the Hittites, and the Nubians.