History of cheese: There are lots of different kinds of cheese.

How to preserve milk?

If you don’t have a refrigerator, there’s no way to keep milk from going bad within a few hours. Even WITH a refrigerator milk goes bad in about a week. But ancient cows and sheep and goats only gave milk part of the year, right after they had had their babies in the spring.

History of sheep
Where did cattle come from?
All our Africa articles

By mid-summer their milk had all dried up. And yet milk was an important source of fat and protein for many people. How could people manage to preserve this milk to be able to eat it in the fall and winter as well?

How to make cheese

How do you make yogurt?

If you leave milk out on a sunny kitchen counter on a warm day, it will soon get all lumpy and turn into yogurt. This is because bacteria called yeast get into the milk from the air and eat it. Some bacteria are bad for you, or make the milk taste bad. But if you get the right kind of bacteria in your milk, it turns into good yogurt.

Are yeast good for you?
What are proteins?

The yeast eat the lactose in the milk (a kind of sugar). Then they break down the lactose for energy inside the cell. Finally they poop out what is left over: lactic acid. The lactic acid changes the part of the milk that the bacteria don’t eat: the protein. Normally protein molecules are curled up in balls, but the lactic acid makes the proteins unfold. Then the proteins get tangled up with each other, making one solid lump. 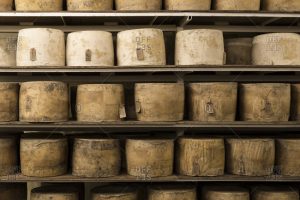 Yogurt tastes good, and it will keep for a few days without being refrigerated, but it still won’t keep all winter. Once people realized how to make yogurt, they began experimenting with other types of bacteria. They found that you can use different bacteria to make aged cheeses.

You can also make cheese by adding acid to milk. If you’re already making wine, then you can let some of the wine turn to vinegar, and add a little vinegar to the milk to curdle it. This is what Miss Muffet eats: curds and whey. The whey is what is left over when you make curds; it’s full of protein.

History of wine
Where do lemons come from?

A recipe for ricotta

Try it yourself: heat two cups of milk in a small saucepan on the stove. When it is warm, add two tablespoons of vinegar or lemon juice. Stir it once in a while, and let it keep heating until it’s about hot enough for hot chocolate. Don’t let it boil, or it will make a mess.  If it doesn’t curdle, add another spoonful of vinegar and stir. When it does curdle, use a strainer or a cotton cloth to drain out the whey, and you’ve made cheese!

People were making cheese in Poland by about 5500 BC. Some of these cheeses can be kept without being refrigerated for four or five years or even more. Swiss cheese is an example of an aged cheese that you might have eaten. Or cheddar cheese. Most aged cheese is made using rennet, a piece of the stomach lining of a cow. Indo-European people in Central Asia may also have been the first to use rennet. They probably saw when they killed baby cows for their meat that inside their stomachs, milk turns into (yuck) cheese (check it out sometime when you throw up!), so they started experimenting with calf stomachs to see if they could make something good to eat that way.

Because you use cow rennet to make aged cheese, in India (where cows were sacred to Hindus) people mostly ate yogurt, rather than aged cheese.

You make cheese by adding a little bit of rennet to some milk, which makes it clump up and divide into curds and whey, and then straining out most of the whey, leaving solid curds (the milk you buy at the store will work fine! You can buy rennet pretty easily). It’s pretty hard to make aged cheese, but it is not hard to make yogurt or fresh white cheese.

Bibliography and further reading about cheese and cheese-making: