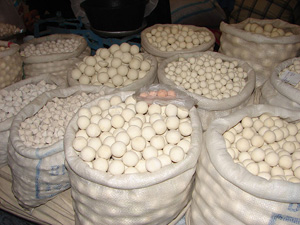 Dried sour yogurt balls in Tashkent, Uzbekistan (thanks to Jeff and Becca Zanatta)

The nomads who lived in Central Asia, like the Scythians, the Mongols and the Turks, mostly lived on the meat and milk from their big herds of cattle. They ate a lot of yogurt and cheese and steaks, and dried strips of beef like beef jerky.

Where do cattle come from?
A history of cheese
What is yogurt made of?
All our Central Asia articles

What about fruits and vegetables?

They also ate apples and carrots, and many herbs related to carrots like celery, parsley, cilantro, dill, cumin, caraway, anise, and fennel.

History of apples
Where are carrots from?

These nomads also traded their meat to farmers near them in China and West Asia and India to buy flour for bread. They were already eating wheat and millet bread by 3000 BC. Their bread was a flat bread like naan, or like pita bread, or pizza crust.

History of wheat
Where is millet from?
West Asian food

What about beans and peas?

With their bread, people ate stews and sauces made with meat or chickpeas or lentils. Sometime around 1000 BC, the first chickens arrived in Central Asia from India, and cooks added chicken and eggs (often hard-boiled) to their recipes.

History of chickpeas
More about lentils
Where are chickens from?

As the Silk Road got going in the 400s BC, Central Asians got more used to eating foods that came from further away: Indian cinnamon and pepper and bananas, Chinese rice and peaches and citrons, West Asian figs and almonds, African dates.

Indian cinnamon
And black pepper
History of rice
Where are peaches from?

New foods in the Middle Ages

Lemons and oranges
History of sugar

All of these became popular in Central Asia – Iranians and Afghanis ate a lot of lemons – but traders also succeeded in selling these new fruits and vegetables all over Asia and Europe and Africa.

What about Russian food? 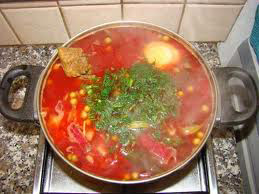 Further west, in Russia, people farmed the land instead of herding cattle. Here people ate mainly rye bread (not flat bread but risen bread made with beer yeast or sourdough), kasha made from millet or barley, cabbage soup, and roots like turnips, carrots, and beets, that could survive the cold weather.

Pickles (pickled cucumber, but also pickled cabbage and onions and carrots) were popular, and pickled herring, and onions and garlic. Everyone, even children, drank a lot of beer and ale. People also ate oatmeal.

For fresh fruit, the Russians had melons, apples, pears, plums, and cherries. They used honey for sweetening things. Nuts and mushrooms were popular. Like the Mongols, Russian people ate a lot of milk, butter, cheese, and yogurt too.