Where are chickpeas from? West Asia 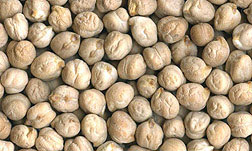 Chickpeas are from West Asia

Chickpeas are a kind of bean that probably evolved in West Asia, in what is now eastern Turkey, around the same time as other flowering plants, about 100 million years ago.

Chickpeas have lots of protein and fiber, so they fill you up, and they are very easy to dry and store for a long time, plus they are delicious, so people probably started munching quantities of chickpeas as soon as they reached West Asia, about 50,000 BC.

Why do we need protein?

Early farming and the history of chickpeas

Chickpeas were one of the first plants that people started farming, in what is now Turkish Kurdistan about 10,000 BC – around the same time as lentils and figs.

More about lentils
And about figs

But when people began to farm chickpeas, they quickly made an important change in the way chickpeas grew. Wild chickpeas get ripe in the winter, when there’s plenty of rain.

What causes the seasons?

But because it’s wet, these wild chickpeas often get moldy. Sometimes the whole crop might be ruined. So early West Asian farmers chose chickpea seeds that would ripen in the summer instead. You had to water these chickpeas by hand, but they wouldn’t get moldy on you. 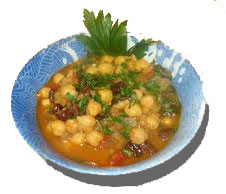 How did people eat chickpeas?

Chickpea farming soon spread north to the Yamnaya, and east across Central Asia to Afghanistan and western China. By about 4000 BC, traders also spread chickpeas westward to the Mediterranean. By the time of Neolithic Greece, people were farming chickpeas at Dimini and Lerna.

India and East Africa get chickpeas

By the time of Julius Caesar, about 50 BC, the growth of the Roman Empire had brought chickpeas even to northern Europe.

The invention of falafel

Sometime later – maybe as late as the early Middle Ages – people in Egypt began to soak and then grind raw dried chickpeas. They mixed the ground chickpeas with water and spices and fried balls of the batter in oil to make falafel. Falafel balls make a good substitute for meat, and soon people were cooking falafel all over West Asia.

The Romans in Egypt
Fatimid Egypt

Did you find out what you wanted to know about the history of chickpeas? Let us know in the comments!

How to make your own falafel from scratch

Bibliography and further reading about chickpeas: