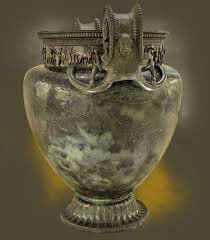 Vix crater: a large bronze jar for mixing wine made in Greece and found in a rich woman’s tomb in central France (ca. 500 BC) – Iron Age Europe

Settlers arrive from other places

About 1000 BC, Greek and Phoenician colonists were settling all around the Mediterranean Sea, and bringing more and more West Asian and Greek culture to Northern Europe.

What were Europeans trading?

History of iron
Where does salt come from?
History of pigs and pork
Black figure pottery
History of slavery

The chiefs used these luxuries and the swords to get more and more control over their people. The resulting culture, known as the Hallstatt culture after a salt mining area of Austria that got rich from selling salt, spread all across Europe in the 700s BC.

Hallstatt and the Illyrians 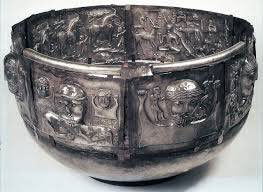 Around 500 BC, the Hallstatt Culture was displaced by the La Tene (lah-TEN) culture, centered further north and west in what is now northern Germany.

Beginning around 100 BC, the Romans began not just to trade, but to conquer the people of northern Europe.

Who are the Romans?
The Roman army
All our ancient Rome articles

By 150 AD, the Roman Empire controlled Britain, France, Belgium, much of Germany, Spain, Portugal, and the Balkans (as well as Greece and Italy). North of the Danube River, most of Central Europe was still independent, but they were more and more influenced by Roman traders and Roman ideas. 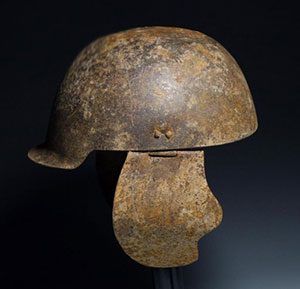 The fall of Rome

But the power of Rome was already ending. When the Sassanians began to attack Rome’s eastern border about 220 AD, the Northern Europeans attacked at the same time, and the Romans had to split their army between the two wars.

Who are the Sassanians?
Attila the Hun

The Visigoths
The Vandals
The Franks
And the Ostrogoths

To get away from the Huns, the people of Northern Europe started to move into the Roman Empire. In 376 AD, the Visigoths crossed the Danube river; in 409 AD the Vandals, Alans, and Sueves crossed the Rhine river, and the Franks and Ostrogoths soon followed them.

Bibliography and further reading about the Iron Age in Europe: