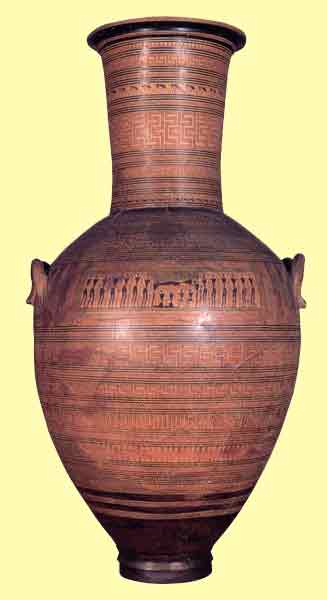 Dipylon Vase (Geometric pottery), a grave marker from Athens. This vase is about six feet tall!

Gradually the Sub-Mycenaean pottery of the Greek Dark Ages developed into a new style we call the Geometric.

As times improved in Greece in the Archaic Period, around 900 BC, people began to want better dishes again too, and potters began to pay more attention to what they made.

Instead of just the one wavy line of the Sub-Mycenaean style, now lots and lots of lines and patterns began to crowd over every inch of the pots. Elizabeth Barber thinks the Greeks might have been copying patterns from West Asian clothing they got in trade from the Phoenicians.

Art historians call this horror vacui, a Latin phrase that means “fear of emptiness,” because the artists seem to want to leave no empty space. 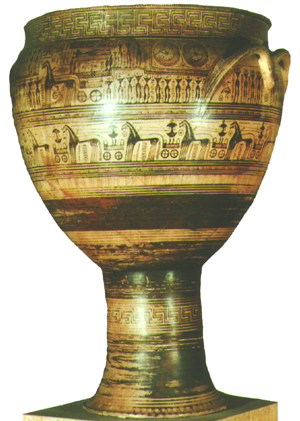 Two cities in particular developed special ways of decorating pots. These were Corinth and Athens. In Corinth, where many ships from Phoenicia stopped, potters began to make tiny little pots for perfume.

Ancient Corinth
Athens in the Archaic

Then they decorated these tiny pots with mythical animals in a West Asian style. These pots became very popular, and soon the potters of Athens began to also try to make pots that would sell for high prices.

Athenians, who did less trading, were not as interested in West Asia as Corinthians were, and so they invented a different style. In Athens the potters began to paint scenes from Greek mythology on their pots, especially scenes from Homer‘s Iliad. To fit the scenes on, they made larger pots than in Corinth. 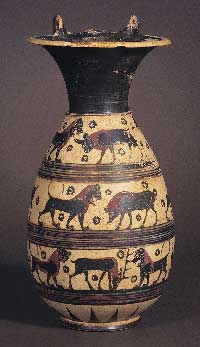 A lot of the Athenian pots were for funerals. When people died, their relatives put these pots in their graves, or used them as grave markers (like tombstones). Often these pots had funeral scenes on them. 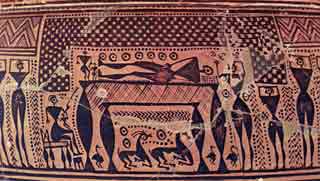 Soon the Athenian pots were selling very well. The Corinthians began to try to cut prices by producing shoddier pots, made faster and not so well. Instead of painting three animals, they now painted one very long dachshund type animal.

But these pots did not sell so well. By about 550 BC, the Corinthians stopped making pottery to sell. About the same time, the Athenians began to make even better quality black figure pottery.

Learn by doing: draw a copy of a Corinthian vase
More about black figure pottery