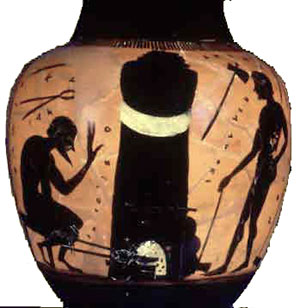 Archaic Greek economy: A black-figure vase showing a blacksmith at work (Athens, about 550 BC)

Not much trade in the Dark Ages

During the political collapse of the Greek Dark Age (about 1200-1000 BC), many Greek people did not have children, or left for other countries. There weren’t so many people living in Greece anymore.

The Greek Dark Age
All our Ancient Greece articles

Because all the countries around them were also poorer, everybody did less trading. There wasn’t anyone to buy Greek wool cloth, so Greek people began to raise cattle instead of sheep.

History of cattle
More about sheep 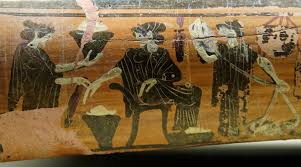 After the Dark Ages, people started to use iron, and that made them richer.

Iron and blacksmithing
The Greeks and coal

Trading started up again. People went back to raising sheep rather than cattle, and they began to make wool cloth, and to trade and fight again. 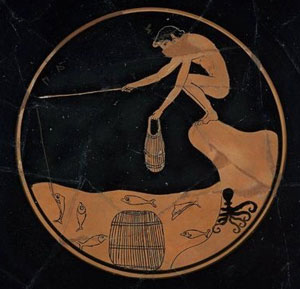 A boy fishing with a pole and lifting out a crab trap (Athens, 400s BC)

Because they were mercenary soldiers, by the Archaic period Greek men learned about minting coins from the Lydians they fought for in West Asia, and soon each Greek city-state was minting its own coins.

Who did the Greeks trade with?

Greek traders began to use these coins as they traded with the Etruscans, the Phoenicians, and the Egyptians.

Who were the Etruscans?
What was happening in Egypt?

As the Mediterranean region recovered from the Dark Ages, the Greeks and the Phoenicians sent out many groups of settlers to colonize (conquer and take over) southern Italy, southern France, Spain, and North Africa.

Greek trade to the East

Greeks traded to the east, too: they sold the tin and salt and slaves, obsidian, wine and pottery to the Lydians and Phoenicians and Egyptians.

What is obsidian?
Slavery in ancient Greece

Greek traders bought glass beads, medicine, spices, silk and papyrus from those people. Further north, around the edges of the Black Sea in Central Asia, Greek traders bought wheat and barley, cattle and horses, wood and slaves from the Scythians, and sold them pottery, wine, iron and bronze tools, and linen.

Learn by doing: on a map of the Mediterranean and Black Sea, show what is being traded and where
More about the Classical Greek economy

Bibliography and further reading on the archaic Greek economy:

The Dark Age of Greece: An Archeological Survey of the Eleventh to the Eighth Centuries B.C., by Anthony Snodgrass (2000). Snodgrass thinks that an increase in population caused most of the changes of the Archaic period.

Warriors into Traders: The Power of the Market in Early Greece, by David W. Tandy (2001). More controversial; Tandy argues that Greek colonies were founded by traders, not because there were too many people living in Greece.

The Greeks Overseas: The Early Colonies and Trade, by John Boardman (2nd edition 1999).