What is linen? What is flax? 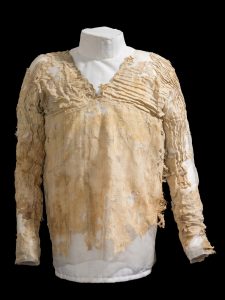 History of linen: The Tarkhan Dress, the world’s oldest woven clothing – linen,  from Egypt, about 3500 BC

Linen is one of the first fibers that people made into string and cloth. Linen comes from the flax plant, which grows all over the Mediterranean region and Central Asia.

Where does cotton come from?
How about hemp?
Sheep and wool
More history of clothing

Flax is a tall, reed-like plant, with long fibers which make it easy to spin into thread. It has lovely blue flowers. You pick the plants, and then leave them to soak in a tub of water or a stream until the hard outside stem rots away and leaves the long, soft fibers underneath. People call this retting the flax. 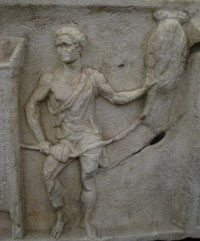 History of linen: Man spinning flax (Museum of the Baths of Diocletian, Rome)

Then you take the fibers and spin them on a spindle into linen thread. In Central Asia, people were spinning linen thread and rope by about 30,000 BC, long before wool. It took longer to invent weaving, but by 5000 BC, at the latest, people were weaving linen into fabric.

History of spinning
Invention of weaving

You can spin linen into a thick, strong thread, or you can spin it very very fine, depending on the skill of the spinner and what you want to use it for. People in Egypt made sails out of coarse linen, for example, but used very fine linen for expensive tunics. It is hard to dye linen, so mostly people wore it white, the way it is naturally.

Where did people wear linen? 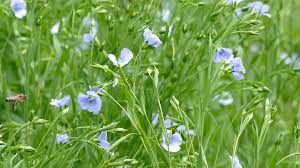 Where linen comes from: Flax plants with their blue flowers.

Linen is not as warm as wool, but it is much softer and more comfortable on the skin (after you wear it a while; at first it is stiff and scratchy). In the first millennium BC, people in North Africa, Egypt, and Sudan, and West Asia mostly wore linen, while Greeks and West Asians and Germans mostly wore wool. In China, people mostly wore hemp or silk clothing instead, and in India and the Americas, people wore cotton.

Cotton in the Americas
Hemp in China
History of silk

By the Roman period, however, many Europeans wore linen tunics for comfort with wool robes over them for warmth, and in the Middle Ages in Europe this continued to be common, so that “linen” got to mean something like “underwear” (that’s why most of our underwear is white). Our word “lingerie” is related to linen. In the Islamic Empire, on the other hand, people started to wear mainly linen and cotton, and not so much wool.

Linen in the Middle Ages and today

Around 1100 AD, manufacturers figured out a way to make a lot more linen cloth more cheaply by using a spinning wheel instead of hand spindles to spin the flax.

By the 1700s, big factories had spinning machines to spin flax. But right after that, in the 1800s, the cotton gin made cotton a lot cheaper than linen. Cotton and wool are also a lot easier to knit than linen is, and today most of our clothes are knit instead of woven.

People stopped wearing much linen. Today, most of our clothes are made of cotton, and linen is only for once in a while.

Bibliography and further reading about the history of linen:

Eyewitness: Costume, by L. Rowland-Warne (2000). For kids, but mainly European clothing, from earliest times to modern.