Why were there mummies in ancient Egypt?

Egyptian mummies were buried in coffins. This mummy is from the New Kingdom (Vatican Museum, Rome).

Because Egypt is a very dry place, where it hardly ever rains, the ground there is also very very dry. When you bury people in such dry ground, they often don’t rot. There are too few bacteria alive in the ground. Instead, the bodies often gradually dry up and turn into mummies.

When did ancient Egyptians start to make mummies?

Beginning about 3500 BC, just before the Old Kingdom got started, Egyptian people started to help this process along by drying out the bodies themselves. They liked the idea that their bodies would be preserved forever and they thought maybe that would be useful in the afterlife.

The Egyptian afterlife and the weighing of souls 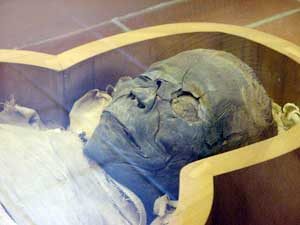 How did they make Egyptian mummies?

Poor people (which was most people) just kept on wrapping bodies in linen shrouds and burying them in the dry ground as they always had.

But rich people used a fancy mummification process. First the undertakers took out your guts and put them in canopic jars. Then they pulled your brain out through your nostrils using a hooked stick like a crochet needle. These wet parts of your body, with lots of bacteria in them, might cause your body to rot.

They left your heart in though, because they thought your soul lived in your heart and you would need it in the afterlife. 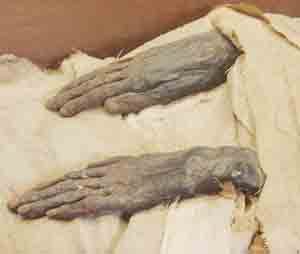 What is natron and how did they use it?

After they emptied out your guts, the undertakers stuffed you full of natron. Natron is a mixture of salt and soda ash (the ash you get from burning salty plants like seaweed) that dries things out. Egyptians probably first used natron to preserve fish for storage. But Egyptian undertakers poured natron all over you too.

Wrapping the mummy in linen bandages

Then the undertakers waited a few weeks for you to dry out. When you were dry enough, they washed off the natron and stuffed you with leaves and sawdust and other scraps so you would look more normal. Then they wrapped your whole body in strips of linen, tucking in good luck charms as they went. Then they covered the linen with a layer of papyrus scraps, like paper-mache.

What is linen?
What is papyrus?

Finally the undertakers put you in a series of wooden coffins, one inside the other, and then in a stone sarcophagus.

Egyptian mummies were buried in wooden mummy coffins – this is one from Old Kingdom Egypt (Fayum, ca. 2700 BC)

The richer you were, the more complicated your mummification was. If you couldn’t afford natron, for example, you might just have your guts taken out and stop there. Or the undertakers might not wait so long for you to dry out completely. But most people were too poor to have any mummification at all, beyond what the desert provided naturally.

Did you find out what you wanted to know about Egyptian mummies? Let us know in the comments!