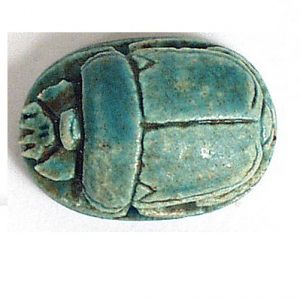 People in ancient Egypt worshipped the gods in many different ways. There were normal, everyday, little things. And there were big ceremonies involving thousands of people. Many people, for example, wore a little amulet – a bead on a string around their neck to push away evil spirits. Many people wore a scarab bead – a bead in the shape of a scarab beetle. They thought a scarab amulet would bring good luck.

This person had tattoos on their neck. After they died, they were mummified, and that preserved the tattoos.

Many people in ancient Egypt also got tattoos on their skin to show that they were especially close to one particular god, or, again, to bring good luck. One man got a tattoo on his upper arm of two horned animals, but it didn’t save him – he died from being stabbed in the back!

When ancient Egyptian people got sick, they often turned to priests or doctors for magical treatments. Priests would often write the words of a magic charm on a piece of papyrus, and then wash the words off with water, and have you drink the water, to get the magic inside you. Do you think this would have worked to make people better?

But ancient Egyptian religious rituals could also be something you did as part of a big group. Often there were big parades with feasts. Priests took the statue of the god out of his temple to go visit the other gods in their temples.

They dressed the statue up in fresh party clothes, and carried it to a boat, or to a wagon, and you all went down the river, or down the road, to the next temple for a party. At the end of the day, the god would come home again, and you all came with him.

Learn by doing: a project with hieroglyphs