Early African Religion – what was the first religion?

Early African religion – what was the first religion?

The earliest evidence we have for religious faith anywhere in the world is from Blombos Cave in South Africa, where people may have been using red ochre for funerals about 100,000 years ago.

More about Blombos Cave
All our Africa articles

Around 6000 BC, people put up standing stones in East Africa (modern Sudan). These stones may have marked the changing seasons. Maybe the standing stones at Nabta Playa showed people when to hold important religious ceremonies.

More about the standing stones

African religions in the Bronze Age

Ancient Egypt: In Egypt, by 3000 BC people were already worshipping Isis, Osiris, Ra, and the Amen. Further south in Sudan, the Kushites seem to have also worshipped these gods, along with their own gods, Apedemak and Sebiumeker. Some Nubian gods, like Bes, seem to have travelled north from Sudan to Egypt too. 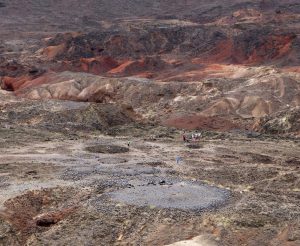 The Bronze Age cemetery at Lake Turkana, in Kenya (3000 BC)

East Africa: South of Sudan, in Kenya, also around 3000 BC, people living around Lake Turkana built a large cemetery with mounds, stone circles, and large standing stones. We don’t know who their gods were, but they thought funerals and cemeteries were important.

West Africa: In West Africa, however, the Bantu people seem to have been more monotheistic. They thought of there being one god, sometimes a sky god or sun god and sometimes not.

By around 1300 BC, we can see the first strains of an interest in monotheism emerging in Egypt, too, with Akhenaten. Did Akhenaten get the idea to worship only one god from West Africans? Nobody knows.

Polytheism triumphed when Akhenaten died, though, and survived through the conquest of North Africa by the Phoenicians who introduced their own gods to North Africa, like the goddess Tanit and the god Ba’al.

The god Baal
More about ancient Carthage
Who were the Phoenicians?

Tanit was a moon goddess – that’s why she has a crescent moon over her head on this carving. In North Africa, she was probably a mixture of the old Phoenician goddess Tanit and a local African moon goddess.

The goddess Tanit
More about the moon

Ba’al was Tanit’s husband: his name just means “Lord”. People sacrificed young sheep and goats, and maybe sometimes even their own children, to the god Ba’al.

The Greeks, and then the Romans, soon added their gods to the gods worshipped in North Africa.

Need a Halloween costume? Get this African mask from Congo and go as a scary spirit!

Around 300 AD there was a second great change in African religious belief when many North and East Africans gradually followed the Roman Emperor’s lead in converting to the monotheistic faith of Christianity.

The great Christian theologian St. Augustine was from North Africa. By the 500s AD Christianity won over most of North Africa, including Egypt, and also the kingdom of Axum south of Egypt (modern Sudan, Eretria, and Ethiopia). The Christians of North Africa were split among the Donatists, the Catholics, and then the Vandal Arians.

Who was St. Augustine?
More about the Donatists
Who were the Arians?
Axum and Christianity 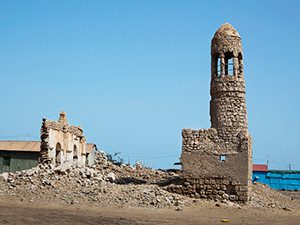 In this same time period, the Bantu were gradually expanding across southern Africa, bringing their faith with them. Bantu faith continued to de-emphasize polytheism, while having instead a firm belief in ghosts and their power over living people.

Who were the Bantu?

Some of these ghosts were your own dead parents or grandparents. Others might be the ghost of a dead king or hero, and these might be remembered for a long time, rather like Christian saints.

African religion: The rock-cut church of Lalibella from medieval Ethiopia, which stayed Christian

In the late 600s AD, another monotheistic faith, Islam, came to Africa, first across the Red Sea to Somalia and Eretria, then to Egypt.

After that, Islam spread rapidly across North Africa. A hundred years later, almost the entire population of North Africa had converted to Islam. Islam quickly spread across the Sahara Desert as well, so that many people who lived in the grasslands south of the Sahara became Muslims too. 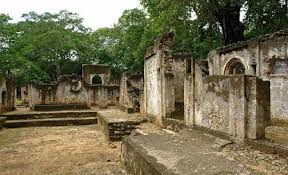 African religion: Remains of the Great Mosque at Gedi, Kenya

All the way south to the great rain forests, there were many Muslims or people who followed at least some Muslim beliefs. And, thanks to Arab and Indian traders, the entire east coast of Africa became Muslim, as far south as Mozambique. Sudan also became mostly Muslim. So most of the people who lived in Africa were Muslims.

But Christian and traditional faiths are still there

Even though many people converted to Islam, many other people didn’t. Ethiopia stayed Christian. People in medieval Ethiopia built big stone churches and wrote long books of Christian prayers and Bibles. 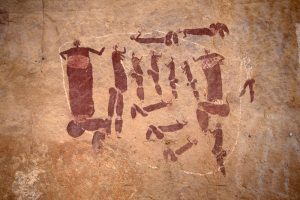 South of the rain forests, in central and western Africa, Bantu religion remained dominant. And in the Kalahari desert, the San people kept up their own faith. It was very similar to the Bantu faith in its emphasis on ancestor ghosts.

More about the San

Did you find what you were looking for about early African religions? Do you have more questions? Let us know in the comments!

Myths and Legends of Ancient Egypt, by Thomas James (1971)

A Coalition of Lions, by Elizabeth E. Wein (2003) – A novel about Christian Africa in the 500s AD- warning: this book is the second in a series!

More about Tanit
More about the god Bes
Quatr.us home