Augustine of Hippo – Christianity and the fall of Rome 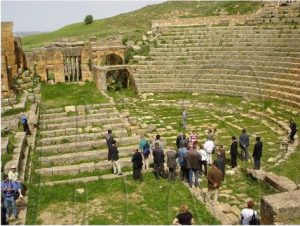 The Roman theater at Thagaste (Souk Ahras), in Algeria, where Augustine of Hippo grew up.

Where was Augustine from?

Augustine of Hippo was born in a small town in North Africa (Thagaste, not Hippo) in the mid-300s AD. His mother was a Christian, and she raised Augustine as a Christian. But Augustine’s father followed traditional Roman religion.

At first Augustine was interested in Manichaeism. That’s a branch of Christianity. Manichaeans divide the world into two: the good and the bad, where the good God is always fighting the bad Devil.

What did Manichaeans believe?

While he was studying in Italy as a young man, he met Ambrose, the bishop of Milan. Ambrose (and the general enthusiasm in Rome) convinced Augustine  to convert to Christianity.

Who was Bishop Ambrose?
History of Christianity

Soon afterwards Augustine went back to Africa to be the bishop of Hippo, a town near his hometown. He wrote a book, the Confessions, about why he had converted to Christianity.

The City of Rome

Not long after Augustine returned home, he got the terrible news that the city of Rome had been attacked and sacked by the Visigoths (in 410 AD). Augustine was shocked and sad.

Visigoths sack Rome
Where did the Visigoths come from?

Then he heard that people were saying that Rome had been destroyed because the Romans had converted to Christianity and forgotten the old gods. People were saying that they should go back to praying to Jupiter and Mars, and then Rome would be safe.
Augustine was very upset by this. No, it could not be so! He knew that the Christian god was the one true god, and Jupiter and Mars were only demons. But then why had Rome been destroyed, just as everyone was finally converting to Christianity?

Augustine writes the City of God

Augustine devoted most of the rest of his life to writing a book, the City of God, that would answer this question. His answer (in a very short version) was that God wanted the things of this earth to be destroyed so that the new world could come. The City of Man (Rome) was destroyed to make things ready for the City of God (Heaven) which was going to come very soon. Meanwhile, everybody should convert to Christianity quickly, or else when the world ended they would go to hell. 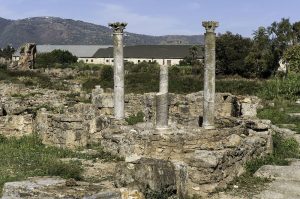 Augustine became the bishop of this Roman town, Hippo Regius in Algeria.

Augustine’s view helped everyone to deal with the fact that the Roman Empire was collapsing around them. His book became very popular.

When did Augustine die?

Augustine died in 430 AD, with the Vandals besieging Hippo, the city he lived in. But he died happy, knowing that when the Vandals took Hippo, it was only another sign that the Kingdom of God was coming soon.

Learn by doing: read the beginning of the City of God
More about the Vandals

Bibliography and further reading about Augustine: