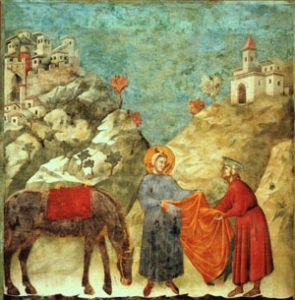 St. Francis of Assisi, painted by Giotto in the early 1300s AD

From early on, Christians believed that some holy people, when they died, not only went to heaven but had the special attention of Jesus. These people had special powers themselves. So they could cure sicknesses and answer prayers of all kinds. Christians called these special people saints. Both men and women, and often children, became saints.

It was hard to tell, of course, whether someone had become a saint after they died. Sometimes people disagreed about it. But generally you looked for this kind of signs: a saint would lead a very holy kind of life, and often would not marry or have children. They would never do anything bad. A saint would do miracles even while they were alive, like curing sick people or saving a city from being destroyed. 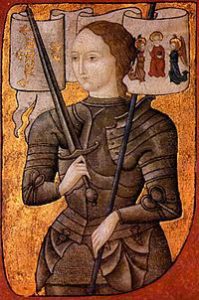 And often, a saint would die some kind of special death, either being killed by bad people or being taken up to Heaven alive or something like that. After the saint died, too, the saint’s bones and clothes would continue to perform miracles.

Some important Christian saints (for example) were Saint Peter, Saint Paul, Saint Michael, Saint John the Baptist, Saint Nicholas, and Saint Anne (Jesus’ grandmother). Joan of Arc, who was burned for a witch, was made into a saint after her death. There are hundreds of Christian saints.

This idea that some people had special connections to the gods goes back a long time before Christianity, to West Asian ideas about holy men and women. There are also similar ideas in Chinese and Indian Buddhism, for instance – check out the story of the boddhisatva Cheng-Huang.

More about Cheng-Huang
More about boddhisatvas
And more about St. Nicholas
Or St. Francis of Assisi
St. Thomas Aquinas
More about Joan of Arc