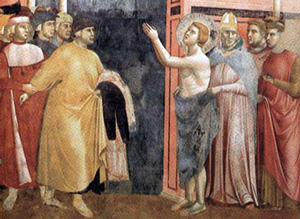 Francis of Assisi gives his father back his clothes (Giotto, in Assisi)

Who was Francis of Assisi?

By 1200 AD, the Catholic Church was very powerful. Bishops and popes were often rich men. They cared more about getting rich collecting tithes than they did about praying or helping poor people.

What is a bishop?
What is the pope?
History of Christianity
More medieval Europe articles

Then in 1205, a young man named Francis, from the town of Assisi in northern Italy, had a vision from God. Francis heard God tell him to start a new group of monks who would live simply and help the poor.

His family and education

Francis wasn’t born poor. When Francis was born, about 1182 AD, his father was a rich cloth merchant in Assisi. Like other European kids whose parents got rich from selling wool on the Silk Road, Francis went to good schools. When he grew up he fought for his town in Italian wars.

Selling wool in the Middle Ages
What were medieval schools like? 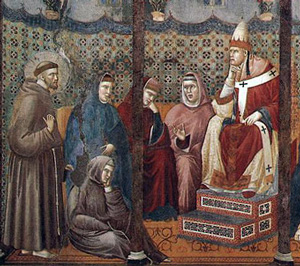 Francis has a vision from God

But when Francis was 23 years old, he got very sick, and then had this vision from God. Francis left the war and made a pilgrimage to Rome.

What is a pilgrimage?

In Rome, he sat and begged along with other beggars. Francis vowed that he would always live among the poor. He told his father he wouldn’t take his money, and became a monk.

What is a monk?

In 1209 Francis started preaching to crowds of people in Assisi. Given that the French king Philip Augustus had just killed thousands of Albigensians for their revolutionary religious ideas, this was a brave, radical thing to do. Francis wore a rough brown robe and went barefoot. He told people to follow the teachings of Jesus and live like Jesus.

Who were the Albigensians?

A lot of people liked Francis’ ideas. He became very famous. Thousands of men joined up to be Franciscan monks. By 1210, only a year later, even the Pope in Rome said that Francis’ monks could be an official part of the Catholic Church. He and his followers were tonsured. 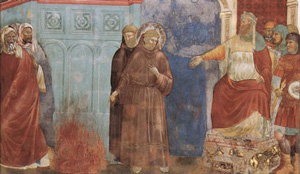 The Poor Clares for women

What is a nun?
Women’s lives in the Middle Ages

Francis tries to convert the Muslims

Then Francis set out to bring his ideas to the Islamic world. In 1219, when Francis was 37 years old, he sailed to Egypt with the Fifth Crusade. During a cease-fire, Francis tried to convince the Ayyubid commander Malik al-Kamil to abandon Islam and become a Christian. But al-Kamil wasn’t interested, and the Fifth Crusade lost its battles and returned to Italy.

What was the Fifth Crusade?
Who were the Ayyubids?
More about Islam

Francis, now middle-aged, spent most of his time organizing the growing numbers of Franciscan monks and nuns. By this time there were Franciscan monks and Poor Clares in Israel, France, Germany, Hungary, and Spain. Francis wrote down a lot of his thoughts, often writing in Italian instead of Latin, because he was writing for ordinary people and not for rich people. He was one of the first people who wrote in Italian.

In 1223, when Francis was about forty years old, he showed a Nativity scene for Christmas in a cave near Assisi, which started a fad for Nativity scenes all over Italy and southern Europe.

More about Christmas in medieval Europe 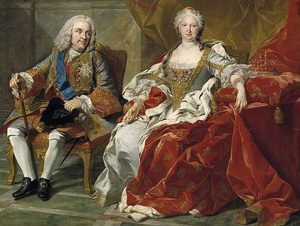 Death of Francis of Assisi

But people didn’t live as long in those days as they do now – three years later, Francis died of an eye disease. He was 44 years old.

Doctors and medicine in medieval Europe

The Franciscan order didn’t stop with Francis. After he died, thousands of men kept on being Franciscans, and lots of women kept on being Poor Clares. The Pope made Francis an official saint. A few hundred years later, in the 1700s,  Queen Elizabeth of Spain sent out groups of Franciscan monks to help take over California from the Native people who lived there. 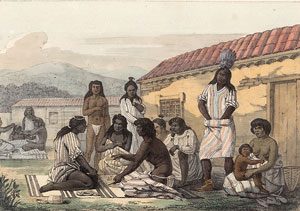 They built missions and tried to make Native people become Christians. Even though Native people tried to fight them off, the Franciscans insisted on living in California. That’s why the city of San Francisco is named after Francis of Assisi.

Learn by doing: check out a Nativity scene at Christmastime
More about Christmas in medieval Europe

Bibliography and further reading about Francis of Assisi: