The first Christian nuns, like the first Christian monks, lived in Africa – they lived alone in the desert in Egypt in the 300s and 400s AD, where they could be alone to pray all day. Like the men, they probably got the idea from earlier Buddhist nuns in India (many traders went back and forth between India and East Africa at this time). Gradually these people formed religious communities, where many people lived together. These young radicals worked together, sharing their money and food, to help the poor and sick, and convert more people to Christianity. For young women, becoming a Christian nun offered a lot of freedom.

But after some time, the bishops made the nuns live separately from the monks, and then made the nuns stop living on their own and move into abbeys, under the supervision of an abbess. 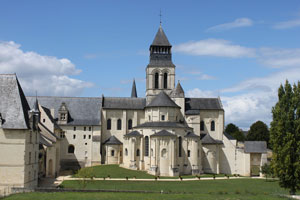 Fontevrault Abbey, where Eleanor of Aquitaine lived the last years of her life

Being a nun could go either way: it could be like living your life in prison, or it could be a path to more independence, safety, and security than medieval women had outside the abbey. Sometimes when for some reason parents felt they had too many daughters, or because they had made a promise to the Church to give their daughter to the church, or because a girl felt a religious calling, the parents would take their daughter to a convent or abbey and she would stay there and live in the convent for the rest of her life. Sometimes families sent their daughters to the convent in order to pay their tithe to the Church. (For another reason, check out the story of Heloise and Abelard).

Nuns all lived together, either in a dormitory or with their own little rooms (called cells). Like monks, they prayed many times a day and went to Mass every day, and sometimes sang the services. Nuns were not usually educated as much as monks either, though they did sometimes learn to read and write. Mostly nuns spent their days the same way other women did. Poorer nuns worked in the gardens and in the fields, or took care of sick people, while nuns from wealthier families, whose families had given money or land to the convent, spent their time spinning,weaving, or doing embroidery on tapestries. Like monks, nuns never married or had children, and they did not own any property of their own. Christians called the leader of the nuns an abbess, and for women who wanted to run something, being an abbess was one way to achieve that.

Women sometimes joined convents when they were older. Sometimes it was because they wanted to spend more time with God. Or because their husbands had died and they needed somebody to live with. Even queens like Eleanor of Aquitaine sometimes went to live in convents when they were old, like moving into assisted living. Boys couldn’t become nuns, but they could become monks.