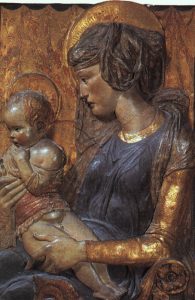 The way people thought about each other in the Middle Ages, everyone was involved in complicated systems of relationships with each other. The first relationships people had were with their own families. In medieval European families, most kids lived with their father and mother and brothers and sisters.

History of the family
All our Medieval Europe articles

Because people died young from diseases, a lot of kids also lived with other relatives. Or they just lived with an older brother or sister, because their parents had died. Most kids never knew their grandparents, who had died before they were born.

In the Middle Ages, hardly anyone went to school. Kids worked in the fields, or took care of younger brothers and sisters. A few children, usually from richer families, were given to monasteries or abbeys to be monks and nuns. Older monks and nuns sometimes taught these children to read and write. The children of very rich men and women sometimes had tutors at home.

History of weaving
What is blacksmithing?
History of slavery

Many teenagers lived with the people they worked for. Some people were still slaves, as in the Roman period. Medieval European traders made a lot of money enslaving prisoners and selling them into slavery. A lot of enslaved people had to go work in West Asia or North Africa.

What is spinning?
Where did honey come from?
Where are chickens from?
How do people fall into debt?

Even peasants who owned their own land often had some of these obligations to the nearest powerful person, as taxes. In exchange, the powerful person was supposed to protect the peasants from invasions and from the king. Rich people were supposed to give people food when there was a drought, and enforce the law (which was mainly whatever he or she said it was). 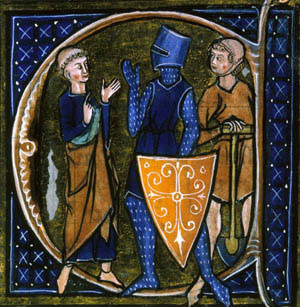 Medieval people: a monk, a knight, and a peasant

Each of these powerful people, in turn, owed obligations to a more powerful person. Each count or countess, for instance, owed obligations to a duke (or duchess) or an earl. If there was a war, the count had to go to the war with his peasants, to fight for the duke. And the count had to send valuable presents to the duke as well, every year. In exchange, again, the duke was supposed to protect the count.

What is feudalism?
What is a monarchy?
Medieval European government

Some peasants also rented land from the Catholic Church. The Church owned about a third of the land in Europe during the Middle Ages. Their landlord would be a bishop instead of a count.

Then over the bishop was the archbishop, and then the cardinal, and over all of those the Pope in Rome. And some people became monks or nuns, in the service of the Church, instead of being peasants.

Learn by doing: a medieval castle project
More about feudalism

Bibliography and further reading about daily life in the Middle Ages: