Children in the medieval Islamic world

Children in the Islamic Empire generally did what their parents did (as many people still do today). Girls never went to school. They worked at home taking care of their brothers and sisters and cooking. Girls carried water from the well, and they went out to look for fuel for the fire. Boys usually worked in the fields, plowing or weeding.

What is a maktab?
What’s a madrassa?
Medieval Islamic families
Islamic math and science
All our Islamic Empire articles

But some richer boys went to school in the maktab. At school, they learned to recite the Quran. They also learned how to live an Islamic life. When they got older, if they were hard working and their families had enough money, they might go to a madrassa (like going to college) for more education. Some girls also learned to read and write at home, like the poet Lalla Arifa.

Friendships in the Islamic world

Friendships were less emphasized in the Islamic world than family relationships. Usually people got their positions through an uncle or a cousin. But we do still hear of close friendships between both men and women. The Mongol queen Toregene and her minister Fatima, for example, seem to have been close. 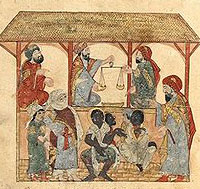 When the free children grew up they usually got married. Most women married their first or second cousins. Islamic law allowed men to have up to four wives if they could take care of all of them equally, but most men still only had one wife. Some powerful traders and sheiks had more than one wife. People who were enslaved, though, often could not marry or even have any children. 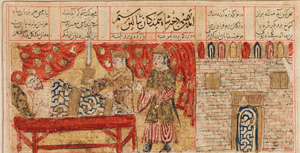 Once they were married, women moved to their husband’s house and took care of his house. Women hardly ever went out of the house alone – when they went out, their husbands or brothers, or an enslaved servant, went with them, and they wore a veil covering their heads and sometimes their faces so nobody would see them. A lot of women earned money at home, spinning, weaving, and knitting cloth. Many women worked in the fields, planting seeds and weeding and harvesting. Others worked as cleaners, or carried water, or worked at the surface of mines, sorting the ore. Some rich women were able to get political power, like Tamta, who ruled the city of Ahlat in the 1200s AD, or Toregene.

Slavery in the Islamic world

Most of these slaves were poor fieldworkers, who worked too hard even when they were children and did not get enough to eat. Racism convinced some Islamic scholars that it was okay to force people to be slaves, because, as the North African historian Ibn Khaldun said about 1400 AD, “The black nations are, as a rule, submissive to slavery because they… have attributes like those of dumb animals.” That was wrong; your skin color makes no difference to how smart you are. But many medieval Islamic people wanted to believe it, so they could enslave people without feeling too bad about it.

Learn by doing: try on a head scarf or a veil
More about people in the Islamic Empire