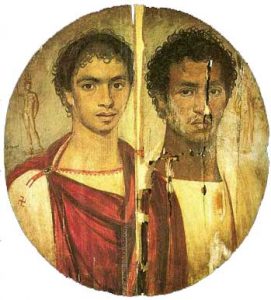 An Egyptian portrait of two brothers (Roman period, about 150 AD)

Biologically, there is no such thing as race. Sure, people come in a lot of different skin and hair colors. But there is no sharp division between them, only a gradual blending. And the color of your skin and your hair doesn’t tell anything else about you. It doesn’t tell whether you are smart or stupid. Nobody can tell from your skin color whether you are nice or mean. Your skin color doesn’t show whether you are lazy or hard-working. So this page is not really so much about different races. It’s more about how people long ago thought about skin color and language, and what they thought that meant. 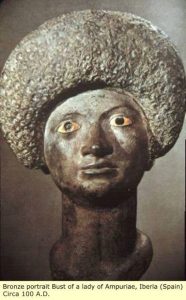 Is she a black woman? A bronze carving from Roman Spain, about 100 AD.

From the Stone Age through the Middle Ages, all over the Mediterranean, Europe, and West Asia, people don’t actually seem to have been very interested in skin color. They did notice that northern people were generally lighter-skinned, and southern people were generally darker. But they didn’t think their skin color meant anything else about them. And they were right. Most of the people we talk about in our articles were in the middle: not pale white, and not dark brown either, but a sort of pale brown.

On the other hand, this doesn’t mean that ancient and medieval people thought everyone was the same. They did divide people up into groups. They did think that different groups had different characteristics. And generally of course they thought that their own group was the best.