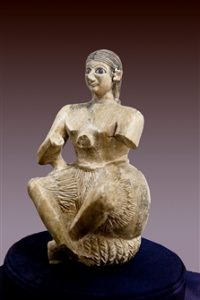 What we notice most about the way people lived in West Asia is the widespread oppression of women. As compared to their neighbors in Sudan, Egypt, Central Asia, the Roman Empire, or even India, West Asian women were much less likely to become rulers. There are very few women who seem to have held any political power in the history of West Asia. That’s true until you get to the Turks. They brought a different tradition with them from Central Asia.

Even for women in private life, West Asia was a hard place to live. West Asian law codes like the Code of Hammurabi prescribed very different penalties for women than they did for men. And West Asian customs and law codes called for only sons to inherit land and cattle. Women generally didn’t inherit, though they could get dowries. 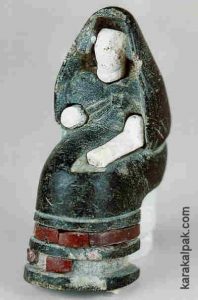 A veiled Sumerian woman, about 2300 BC (Ebla Palace at Tel Mardikh, now in the Idlib Museum, Syria)

West Asia also seems to have been the first place that encouraged women to stay at home as much as possible. People encouraged women to cover their heads and even their faces when they left the house. Rulers did this by making it illegal for women who were enslaved to cover their heads. Then any woman who went out with her head uncovered ran the risk of being treated like a slave. So most women stayed home, or hid behind a veil in public. Public space belonged to men. 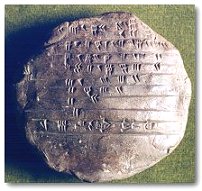 Women generally didn’t get to go to school in West Asia, either. But there were schools for boys in Mesopotamia at least as early as 2700 BC, when teachers were writing down the multiplication tables. By 2000 BC, they were setting problems in calculating which boy got what share of their father’s property, and students were getting the answers wrong.  You could get higher education in West Asia too. For thousands of years, Babylon was a center of learning for people from all over West Asia.

With women and families excluded from public space, men formed close friendships with each other. Some of the greatest pieces of literature from West Asia present images of close friends who care very much about each other.

Gilgamesh and his friend Enkidu fight the monster Humbaba, on an Assyrian cylinder seal from the 600s BC

In the Epic of Gilgamesh, Gilgamesh almost dies of grief when his friend Enkidu dies. In the Bible, the friendship between David and Jonathan is famous. And in the New Testament, Jesus advocated leaving your mother and father to form a “new family” of your “brothers and sisters in Christ.” Jesus does include women here – that’s part of the revolutionary agenda of Christianity – but just a few years later, St. Paul was already back to telling women to cover their heads and be silent in public, and that their husbands are their masters. 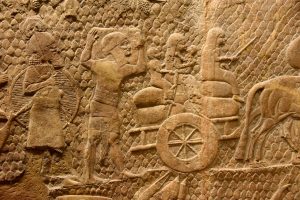 West Asia was also a part of the world that was devoted to slavery. All of the cultures of West Asia, from the Jews in the west to the Persians in the east, from the Sumerians at the beginning of our period to the Turks at the end, included slavery. Various laws, which changed in different periods, regulated the treatment of enslaved people, but slavery was everywhere an accepted, normal part of life. None of the religions popular in West Asia spoke out against slavery: not the Jews, not the Zoroastrians, not the Christians, and not Islam. In addition to working as house servants and in businesses, a lot of enslaved people worked in mines or factories or in the fields, farming.

Some useful links to other websites:

Women in Mesopotamian Society: additional info from History on the Net about the positions powerful women had, and about arranged marriages.
Ancient Tablets, Ancient Graves: Accessing Women’s Lives in Mesopotamia: from Women in World History’s informative blog.