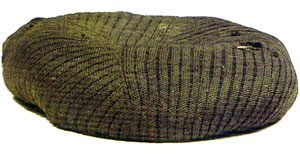 History of knitting: Nalbinding hat from Urumchi (ca. 1000 BC)

Even before the invention of spinning and weaving, people were making cloth using early forms of knitting we call “nalbinding” or “sprang”, which used one needle to hook together short lengths of yarn. Probably people started this early knitting as a way to make fishing nets. There are scraps of loose nalbinding as far back as 6500 BC from Israel. 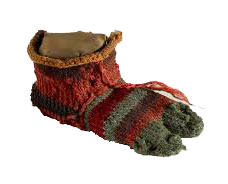 By around 1000 BC, people were nalbinding in a way that looks a lot like knitting, as in this wool beanie from Central Asia. In Peru, the Nazca people used nalbinding to decorate clothing in the 200s BC. Both places were already textile exporters, so commercial textile manufacturers were probably developing new products to sell. 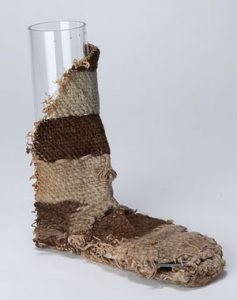 By about 100 AD, textile manufacturers in Roman Egypt were using nalbinding to make socks. Egyptians bought their socks with split toes so you could wear your straw flip-flops with them.

People really liked this nalbinding. Textile manufacturers in Roman Syria, at Dura-Europos, were using nalbinding before 300 AD. By the 900s, people wore nalbinding socks at York, in northern England, and by 1000 AD the Vikings had them in Sweden.

Who were the Vikings?
Iran under the Abbasids
Clothing in medieval Europe
Islamic Empire clothing
Medieval Islamic economy
Pueblo people in America

Nalbinding probably also spread east to Abbasid Iran about the same time, and probably to East Africa. Pueblo people in North America were also using a form of this early knitting to make cotton socks about 1100 AD. 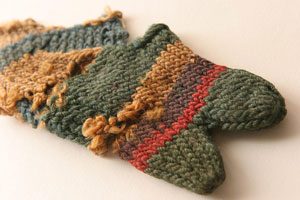 Meanwhile, with nalbinding so popular, Egyptian knitters worked hard to find more efficient, faster ways to make socks so they could sell them cheaper. They invented knitting. Knitting didn’t last as well as nalbinding, but it was a lot faster. Sometime in the early Middle Ages, Egyptians started knitting with two needles. 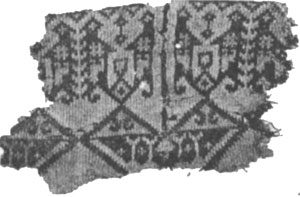 A scrap of patterned silk knitting, scarlet on a gold background, from about 800 AD shows that knitters quickly developed their skills. By 1000 AD, Fatimid knitters in Egypt could make a sock that looks entirely modern. It may be these knitting factories that are behind the invention of the spinning wheel in the 1100s, to keep up with the demand for yarn to make knitted socks.

Who invented the spinning wheel?
Where does silk come from?
Who were the Fatimids?
Medieval African economy

The Fatimids spread knitting all across North Africa and into Islamic Spain. But as the Ayyubids lost power to the Mamluks, their textile factory system fell apart. By the 1200s, Italy and Northern Europe were taking over textile production instead, and they took over knitting too.

Who were the Mamluks?
Medieval European economy

About this time, European knitters also began to use five needles instead of two: this way you can knit a circular tube instead of a square, so it’s a faster way to make socks without a seam. 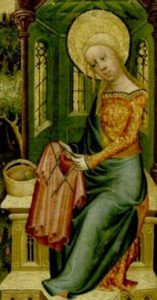 By the 1300s there was a knitting industry in England. At first only rich people had knitted gloves and socks, but knitted stockings were common in Paris by the late 1300s.

What is felting?
Central Asian clothing

Soon English knitters were exporting tens of thousands of pairs of knitted wool stockings every year, and by the 1400s, like people in Asia, Europeans started to use spinning wheels to get enough yarn. People were also knitting hats and then felting them so they would keep off the rain.

Indian and African traders across the Indian Ocean also brought knitting to Iraq and Iran and as far east as Tibet in the 1200s AD. In the Safavid period, after 1500 AD, knitting was common in Iran alongside the Persian carpet business.

Did you find out what you wanted to know about the history of knitting? Read our article about knitting machines here, or ask your question in the comments.

Bibliography and further reading about the history of knitting:

Spinning
Weaving
More about the history of clothing
Quatr.us home