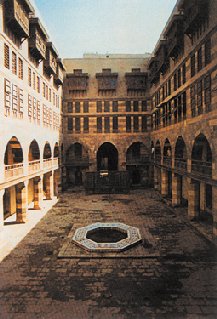 Mamluks: A Mamluk inn for merchants in Cairo

Who were the Abbasids?
Sunni and Shiite
History of slavery
Middle Ages timeline
All our Islamic Empire articles

The caliphs brought the boys up to be Sunni Muslim soldiers in a slave army. These men made a great army. There soon got to be more and more Mamluks.

Nureddin and the Second Crusade

In 1144, the Mamluk general Imad-ud-Din Zangi conquered Edessa, one of the Crusader states founded after the First Crusade. Some people Zangi had enslaved killed him shortly after that, when he caught them drinking his wine.

When the Second Crusade arrived to win Edessa back, Zangi’s son Nureddin fought them off successfully. After the Second Crusade ended without taking any of his territory, Nureddin created a kingdom for himself in Syria. He conquered Damascus from local Muslim rulers.

During the 1100s AD, other Mamluk generals worked for the Ayyubid sultans in Egypt and Syria, but little by little the sultans had less power and the Mamluk generals got more and more power.

Who were the Ayyubids?

In 1244, the Mamluks conquered Jerusalem from the Crusaders. The next year, in 1245, Louis IX of France led the 7th Crusade to try to get it back, but the Mamluks captured him.

Mamluks take over Egypt and Syria from the Ayyubids

In 1250 AD Shajar al-Durr, the mother of the last Ayyubid sultan, killed her son and ruled on her own. She negotiated to end the 7th Crusade and let Louis go. Shajar al-Durr soon had to marry the Mamluk leader, Aybak, in order to keep power, but she continued to rule.

In 1257 al-Durr had Aybak killed to try to rule on her own again. After that the other Mamluks arrested al-Durr herself and then killed her, and the Mamluks got control of Egypt and Syria. 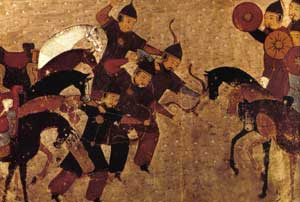 The Mamluk sultans who came after Aybak were the Bahris. They were mainly from Turkish and Mongol families. They ruled Egypt and Syria, and sometimes the Arabian Peninsula.

When the Mongols invaded Syria in 1260 AD, the Bahri Mamluks defeated them at Ain Jalut and pushed the Mongols back to Iran.

More about the Mongols

It was the first time anyone had defeated the Mongols in a big battle. People were very excited! The victory of Ain Jalut prevented the Mongols from adding the Romanized half of the Islamic Empire to their Mongol Empire. The man who led the Mamluks, Baybars, became sultan after the battle. 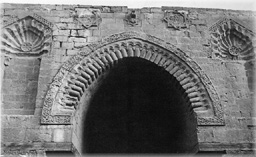 Mosque of Baybars in Cairo

Baybars and the Bahri Mamluks defeated the last of the Crusaders in 1263. The Mamluks really hated the Crusaders, because the Crusaders had made an alliance with the Mongol Khan Mongke against Islam.

The Eighth Crusade
Mongke and the Mongols

There was a big battle at Antioch, and in the end the Mamluk soldiers won. They killed 16,000 Christian soldiers and sold all of the hundred thousand people living in Antioch as slaves. (Compare this to Alexander at Tyre, or the Athenian massacre at Melos)

Mamluk trade with Europe – and the Black Death

From 1293 to 1340, the sultan al-Nasir enjoyed an unusually long reign of 47 years! The Mamluks were very powerful, and his court was very rich with gold and all kinds of luxuries. Mamluk traders sold sugar and paper to Europe, and Mamluk Christians brought the idea of painted Easter eggs to Europe.

History of Easter Eggs
Sugar in the Islamic Empire
Who invented paper?

But this long period of peace and wealth ended just after al-Nasir’s death when the Black Death, or bubonic plague, came to Cairo in 1347 AD and killed many of the people who lived there.

More about the Black Death

The Ottomans defeat the Mamluks

After 1382 AD – after the Black Death – another group of Mamluks took charge. These sultans were the Burjis, and they were mainly Circassians from southern Russia. There was less peace and more fighting among the Burjis. Instead of exporting paper, Egypt began to buy things like paper, sewing thimbles, and sugar from Europe.

But the Burjos were still very good soldiers against other people too. In 1426 AD, for instance, Mamluk soldiers conquered the island of Cyprus, where Europeans had been growing sugar with the work of enslaved African workers. In 1440, the Mamluk army attacked Rhodes, but they could not take it. By 1517, however, the Ottomans defeated the Mamluks and took over their empire.

Learn by doing: playing polo
More about the Ottomans

Bibliography and further reading about the Mamluks: