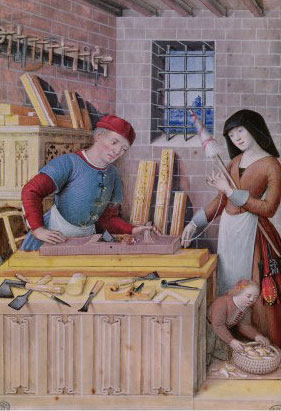 Medieval economy: A carpenter works in his shop. 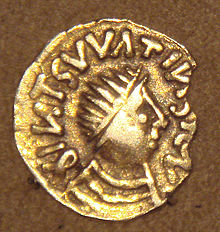 Still even poor people in the countryside kept on using money. People certainly used money in early medieval Spain, Italy, and North Africa, though perhaps not in France, England, or Germany. In the Byzantine Empire, new industries even got started. By about 650 AD, Romans learned how to produce silk. 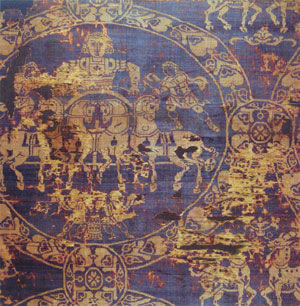 Charlemagne’s burial shroud, made of silk imported from Constantinople (814 AD)

Vikings, living in Scandinavia, in northern Europe, carried on a lot of Early Medieval European trade. Their boats carried European wool cloth, enslaved people, and furs from northern Europe through Russia southeast to the Samanids in what is now Iran. Near the Caspian Sea, the Vikings traded their stuff and people. They bought Central Asian steel, Chinese silk, and Indian pepper and medicines and carried them all back to Europe.

For a while, Mediterranean trade was mostly stopped by Vandal pirates, Viking raiders, and by the Byzantine reconquest. But by about 800 AD trade began to be more secure and more people began to trade. This was for two reasons.

Who were the Vandals?
Timeline: 800-1100 AD
Medieval Islamic economy

Second, Charlemagne had extended his empire over all of France and Germany, and into the Balkans, and over most of northern Italy. So it was really only two big empires that controlled the whole Mediterranean, and these could protect traders better than a lot of little countries.

Who was Charlemagne?
Matilda of Tuscany
Early Medieval Venice
The port city of Genoa

Charlemagne and his Western European armies spent a lot of time fighting the Slavs in Eastern Europe. These long wars worked out well for both sides, because when they took prisoners both sides sold the prisoners as slaves to the Islamic empires, and made a lot of money. In this period, Europe’s main export was probably enslaved people. Our word for slaves comes from “Slav”, and the Slavic word for slave gives us our word “robot”.

Between 800 and about 1000, Mediterranean port cities like Genoa, Pisa, and Toulouse were doing very well selling slaves to the Islamic Empire. After the year 1000, under Matilda of Tuscany, northern Europe became even stronger, and the new port of Venice became increasingly powerful. These cities imported paper, steel, silk, Chinese porcelain, Persian carpets, cotton, sugar, glass, and spices like cinnamon and pepper from Silk Road traders. In return, they sold more enslaved people, but also European wool cloth, perfume, wine, furs, silver, and gold to the Islamic Empire and further east.

History of silver
Why is steel so important? 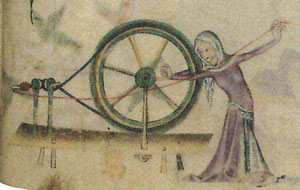 During the High Middle Ages, the Crusades led the kings of France and England to impose a new tax in money, called the Saladin tax, that also helped to re-establish a money-based economy. Fairs and markets became more and more important.

The Saladin Tax
The Crusades

There was also more trade in Northern Europe at this time, around the Baltic Sea. A group of ports on the Baltic Sea, in England, Sweden, the Netherlands and Russia, gradually formed themselves together into the Hanseatic League, (han-zay-AT-tic) which organized trade all over Northern Europe. These traders connected through Russia with the Mongol Empire, which then connected China to Eastern Europe in one big empire.

Who were the Mongols?
Medieval China 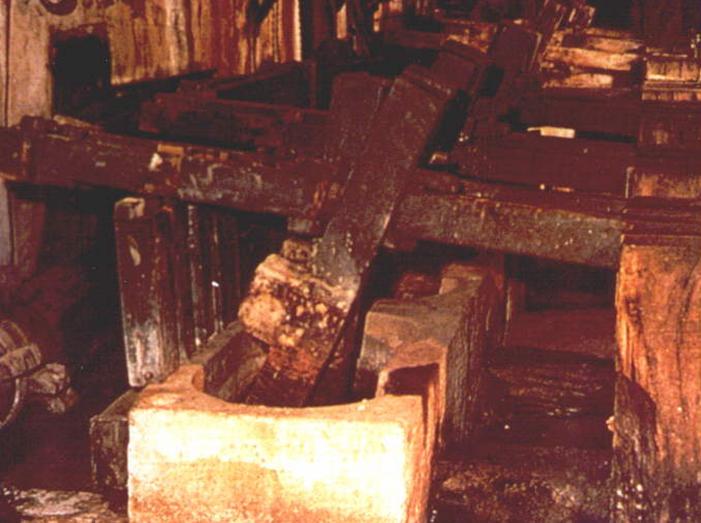 Probably extra good weather around this time also helped to make northern Europeans richer. More of them got educations at the new universities. Around 1250 AD, with this new demand for books, Italian manufacturers started to make their own paper to sell. By the early 1200s, Venice was making its own glass, too. About the same time, Europeans started sugar plantations on Cyprus and in southern Spain, forcing Africans to work on the plantations as slaves. More and more, Europeans made their own luxuries instead of buying them on the Silk Road. 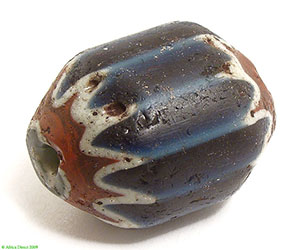 By 1350, the plague wiped out about one out of every three people in Europe, and weakened many of the old relationships between lords and peasants. A lot of peasants whose families had died wanted to move to the cities.

So the cities got more powerful than they had been before, and instead of country fairs and markets, people began to do their shopping at regular stores in the cities. At the same time, the lords and kings began charging more and more taxes in money rather than things, so people had to sell their crops in order to get money to pay their taxes.

Soon people, especially in Italy, were setting up banks and changing money from one currency to another. And Europeans kept right on making more of their own paper and sugar. In the 1300s, Europeans began to sell paper and sugar to Egypt and West Asia, which had been harder hit by the plague and civil wars.

In the 1400s, Italian farmers began to grow their own cotton, and they were working on ways to make their own steel. By the end of the Middle Ages, rather than looking for ways to buy luxuries, Europeans were beginning to look for markets where they could sell their own products.

Learn by doing: making paper
More about the Silk Road