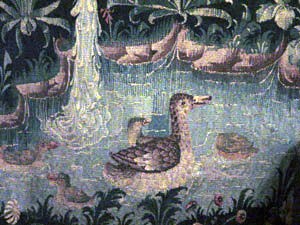 Some people say that the cause of the fall of the Roman empire in the West around 400 AD was a change in the climate, which left many people starving and sick and made people unhappy with their government. It is true that there was a cold period around this time in Western Europe, but it probably came a little later, in the 500s and 600s AD, too late to be the cause of the fall of Roman government.

But around 500 the climate did get colder. In the south, like in Spain, this may have been good: more rain, maybe. In the north, in France, Germany, and England, it was bad. There was a lot of flooding in the river valleys, and people had to abandon many Roman villages in the valleys and move up onto the hills. You couldn’t grow olives or wine as far north as before.

Where does wax come from?
Olive trees and olive oil

One result was a general shift to eating butter rather than olive oil and using tallow or beeswax candles for lighting instead of oil lamps. 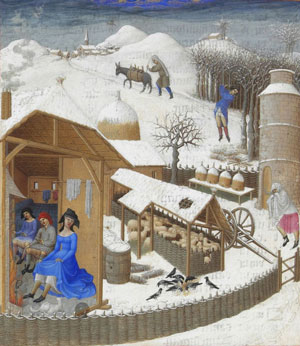 By about 800, in the time of Charlemagne, the weather began to improve again, and around 1000 AD was probably a very good time in Europe, when it was easy to grow wheat and barley and even wine again. The same weather patterns that made for good weather in north-western Europe, however, may have made southern Spain hotter and drier than people liked.

Medieval cathedrals
And universities
Where does wheat come from?

Northern Europe got richer and richer, and built up good armies which conquered a lot of southern Europe. They used their profits to built the big cathedrals, and then to open universities and get good educations, and start manufacturing things like paper and sugar and glass that they had been importing before.

Again toward the end of the Middle Ages, around 1250 AD, there was another “Little Ice Age,” with much the same effects as before. This may have been caused by volcanic eruptions as far away as Indonesia and the South Pacific. There was a lot of flooding, and in England especially there were many years where the crops were ruined and people went hungry. A lot of poorer people had to start eating oat and rye bread – “black bread”  – instead of the wheat and barley they liked better.

History of oats
Why did they start to eat rye?
What causes volcanoes?
Medieval food

But the northern Europeans still had their well-trained and well-armed soldiers. Explorers started to look for places with better weather to conquer and grow crops in.