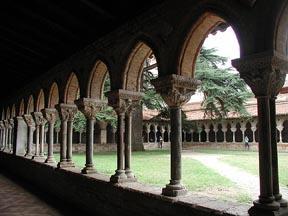 The first part of the Middle Ages saw very little building of anything but houses in northern Europe, as people struggled to adjust to the fall of Rome. People built some small churches here and there in the Visigothic, Vandal, and Merovingian kingdoms, but not much else. 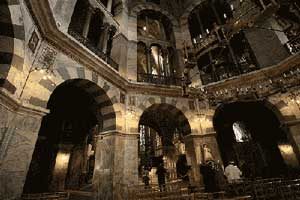 By 800 AD, northern Europe was doing better. Charlemagne built himself a palace at Aachen, and a number of churches. His sons and grandsons built more churches. One of these is the Kastor church in Koblenz, finished in 836.

By 1000 AD or so, people began to build in the Romanesque style in Europe. Southern Europe was still richer than northern Europe, so most of the big Romanesque churches are in the south: the baptistry at Pisa, St. Mark’s in Venice, St. Germain des Pres and Toulouse in France; there’s an equally old church in Bremen, Germany. In the north, rulers built castles at Caen, and then the Tower of London and the Bromserburg, in Germany. By 1100, the caliphs in Spain were also building castles. In the 1100s, thanks perhaps to the Medieval Warm Period, people were beginning to get richer in northern Europe. They built Romanesque churches in Germany, like the abbey church in Regensburg. 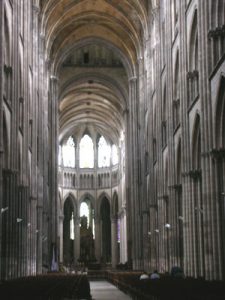 Around 1200 AD, people changed from the old Romanesque style to a new Gothic style: first in Italy, with the baptistery at Pisa and churches at Florence and Pisa, then in France, with the cathedrals of Laon, of Paris, of Chartres, of Rouen, of Reims, of Amiens, and finally in England with Westminster Abbey, in Germany with Munster, Regensburg, Bremen, Freiburg, and Cologne and in Italy with Milan. The Capetian kings of France conquered southern France and used their new riches to build two castles in Paris: the Louvre and the Conciergerie, with the Sainte Chapelle, and another castle outside of Paris, Vincennes. In Spain, the Nasrids built the Alhambra. In Germany, the Holy Roman Emperors built a castle at Heidelberg.

After the Reconquista took over Spain from its Islamic rulers, the Spanish rulers built a Gothic cathedral in Seville as well. The Gothic style lasted until the Renaissance ended the Middle Ages. But the beginning of the Little Ice Age made farming more difficult in Europe, and made people poorer. With the Black Death and the Hundred Years’ War and civil wars in Germany and Italy, not much building happened after 1300, though people in Italy and Germany did build big town halls for public meetings, like the Rathauses in Munster, Munich, and Bremen in Germany and the Palazzo Vecchio in Florence, Italy.

Meanwhile, most people in northern Europe continued to live in small, uncomfortable cottages with wattle and daub walls and thatched roofs. The best architectural development for most people was the invention of the chimney in the Early Middle Ages, which made people’s houses less smoky.