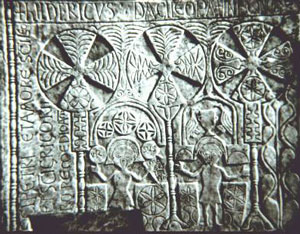 Where did the Lombards come from?

In 568 AD, a Turkic people, the Avars, pushed the Indo-European Lombards out of their home in Central Europe. This was the westernmost edge of a general tendency for Turkic people to take over more of Asia around this time. The Lombards already knew Rome well; they had just been fighting as mercenaries for Justinian‘s Roman army. So the Lombards moved south into northern Italy, and conquered it from the Romans who had been ruling there. They conquered most of Italy, but the Romans under Heraclius fought them off from bits of southern Italy.

Who were the Avars?
And the Indo-Europeans?
Heraclius and the Romans
Early medieval history
All our medieval Europe articles

The Lombards in Italy

In Italy, the Lombards were ruled by their duces (leaders). In some areas the duces were independent. In other parts of northern Italy, they united under a king. The duces (we call them dukes) elected these kings, but often their kings were the sons of the previous king anyway. Lombard kings didn’t have much power, but maybe more than the Merovingian kings at the same time. They thought of themselves as a military unit within the Roman Empire, ruling their province of the Empire.

Merovingians in France
The Vikings as mercenaries

Even though the Lombards sometimes fought the Romans, they also could think of themselves as fighting *for* the Romans. In the late 500s AD, some Lombards still fought as mercenaries for the Roman army, both in Italy and far away in the Eastern Mediterranean, against the Islamic Umayyads. Like most of the other northern invaders of this time they were Arian Christians, not Catholics. They kept their own laws, separate from Roman laws.

The Lombards in the 600s AD

By the 600s, the Lombards didn’t fight for the Romans anymore. But they still thought of themselves as ruling part of the Roman Empire. Independent dukes sometimes made alliances with the Byzantine exarchs. Most of them converted from Arianism to Catholicism, not long after the Visigoths did. Like the Visigoths in Spain, they may even have used one law code for both the Romans and the Lombards.

The Visigoths in Spain
The Romans under Constans II
The Umayyads

The Lombards in the 700s AD

By the 700s the Lombard kings were getting stronger. The dukes couldn’t push them around so much. They joined forces with the Pope against Byzantine iconoclasm, and really controlled all of Italy, down to the boot (but not Sicily; that was still under Byzantine control). So for the first time, they were moving on, establishing a Christian power instead of a Roman power, not so much thinking of themselves as inside the Empire anymore. After all, Vandal North Africa and Visigothic Spain were now under the control of the Islamic Umayyads.

What is iconoclasm?
Empress Irene in Byzantium
Islamic Spain

Who was Charlemagne?
Carolingian Empire
Matilda of Canossa

Modern arguments about the Lombards

Historians studying the Lombards often see things from two different sides: people who think of the Lombards as more like Germans often also want to see the whole history of northern Italy as part of Germany’s history. After all, the Lombards came from outside the Empire. And later on, northern Italy was part of Charlemagne’s empire, and then part of the medieval Holy Roman Empire. And in World War II, Italy was allied with Hitler’s Germany under Mussolini.

People who see the Lombards as more like Romans like to see the whole history of northern Italy as part of Italy’s history. Of course northern Italy lies between southern Italy and Germany, so it has been part of both (and France has been involved too).

Learn by doing: build a castle
More about Medieval Italy

Bibliography and further reading about the Lombards: