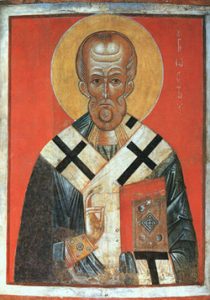 By the early 700s AD, the Roman Empire had seen four hundred years of religious arguments about what or who Jesus Christ was.

What is Arianism?
History of Christianity
Roman religions
All our ancient Rome articles

And people had fought over every possible combination of thoughts in between.

But in 725, the Roman Emperor Leo presented a new idea. Leo suggested that icons, or statues and paintings of Jesus Christ, were a violation of the Second Commandment of Moses.

Also, Leo thought icons were out of line with the belief that Christ was entirely god. If He was a god, He should not be shown as a man. (People were not just looking at these icons, but praying to them and even having them be godfathers to their children!)

Byzantine iconoclasm: Coin of Leo’s son Constantine V with no pictures on it – just writing and symbols

Probably Leo was also influenced by Jewish and Islamic rules. And those rules reflected an even earlier East Mediterranean taboo, that people should not make statues or paintings of the gods.

History of the Jews
More about Islam

Many local people felt that it was wrong to make any images of the gods, or even of men and women who looked like the gods. Leo said all these icons should be destroyed, and he destroyed some himself to show the way. We call this iconoclasm (i-KON-oh-klaz-um).

The people who wanted to still have icons we call iconodules (i-KON-oh-dools). Leo’s men destroyed thousands of icons all over the Roman Empire. Many of these icons were ancient Greek or Roman statues that were great works of art. People burned these statues in lime kilns to make mortar to build medieval houses and churches.

Greek sculpture
What are lime kilns?

The split between Eastern and Western Christianity

Pope Gregory II in Rome objected to this destruction of the idols, and when he died about 730 his successor Gregory III also objected. In western Europe, people kept on making statues and paintings of people. From here on the Eastern and Western churches hated each other.

When Emperor Leo died in 741, his son Constantine V succeeded him, and continued his iconoclastic policies.

Did you find what you wanted about Byzantine iconoclasm? Let us know in the comments!

Learn by Doing – making an icon

Bibliography and further reading about icons and iconoclasm: