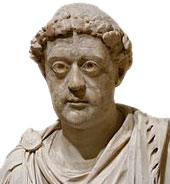 When Justinian II’s assassin Philippicus turned out to be a worthless party animal, other Roman officials killed him. In 713 AD the people of Constantinople chose a court official named Anastasius II to be the next emperor. Anastasius (ann-ah-STAYS-yus) was a practical guy, with good ideas – but in 715 AD the army rebelled and deposed him anyhow. One of the leading generals, Leo the Isaurian, took over.

Who was Justinian II?
All our medieval Europe articles

Leo was an ambitious and successful man, who had risen from being a farmer. He had been planning his take-over for some time. Leo was just in time to save Constantinople from another Abbasid siege in 717. The Bulgars marched down from the north and helped out. But despite this great success, Leo is best remembered for having introduced iconoclasm to the Roman Empire. (So it’s pretty ironic that we have a good image of him!)

What is iconoclasm?
The Abbasids in West Asia

When Leo died in 741, his son Constantine V succeeded him. Constantine continued his father’s iconoclastic policies. He also tried to shut down or reduce the monasteries, because they were hiding icons. Also, a plague in 745-7 killed a lot of people. So more children were desperately needed, and monks didn’t have children.

Christian monasteries
What’s the bubonic plague?
Who were the Lombards?
Medieval Bulgaria

Constantine V was a good soldier like his father. He didn’t have to fight the Arabs, because under the Abbasids the Arabs were no longer so interested in conquering the Roman Empire. He showed little interest in defending Italy from the Lombards, who invaded in 751. But he fought the Bulgars year after year, until he died in 775 at 57 years old. 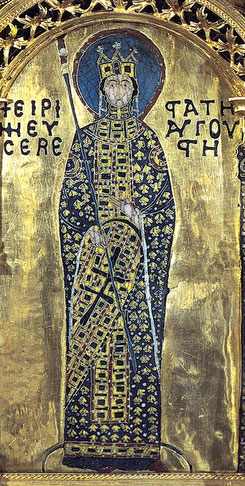 Empress Irene (from the Pala d’Oro in Venice, looted from Constantinople by the Fourth Crusade)

Constantine’s son Leo IV became the next emperor, but Leo IV died in 780, leaving a 10 year old son, Constantine VI, to succeed him. The boy’s mother, Irene, took over as regent for her son.

What is a regent?
Who was the Pope?

Irene was originally from Athens, and she was a total iconodule: she loved images and as soon as she came to power, she put all the images back. In this way she also temporarily mended her relationship with the Pope in Rome. Irene kept power in her own hands even when Constantine grew up. Irene put him in prison to keep him from getting power. Even when Constantine’s supporters rescued him and put him in power, in 792 he ended up letting his mother have the power again. In 795 she had him killed, and from then on, since Constantine left no son, Irene ruled not as regent but as Empress Irene, the first woman to do so.

(Though see the Severans and Pulcheria and Brunhilde for other powerful women in the Roman Empire).

In 800 AD, however, Charlemagne had himself crowned Holy Roman Emperor in Rome, challenging Irene, and in 802 he made matters worse by sending her a proposal of marriage.

Empress Irene seemed to be considering the proposal, when her horrified subjects deposed her and exiled her to Lesbos, where she died the next year.

Learn by doing: making an icon