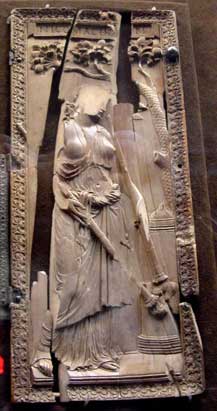 Artemis, carved in ivory in Constantinople (now in the Cluny museum, Paris)

The art of Rome continued in an unbroken tradition from the days of the Republic down to the fall of Constantinople to the Ottoman Empire in 1453 AD, for more than a thousand years after the fall of the western part of the Roman Empire in the early 400s AD. But we can still divide the art produced at Constantinople during this time into several clear artistic periods.

Next is the period of the iconoclasm controversy. This was really a religious rather than an artistic fight, about how the Second Commandment of Moses should be interpreted. Some people (the iconoclasts), influenced by Islamic ideas and a general Eastern Mediterranean taboo on images, thought it mean that people should not make pictures of Jesus Christ or Mary or the saints; other people (the iconodules) thought that was okay. People went back and forth, sometimes making icons (religious pictures), and sometimes destroying them, from 715 until 843, for well over a hundred years. 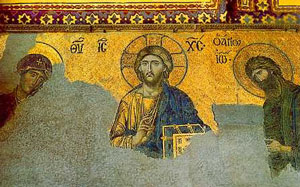 Finally, under the Empress Theodora, the iconodules won, and people went back to making icons again. But they did not go back to making statues, which still seemed too much like breaking the Second Commandment. After 843 AD, practically all of the art created in Constantinople was either paintings or mosaics.