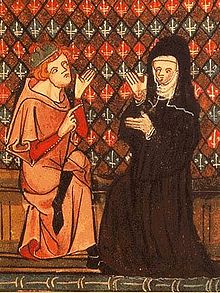 The story of Heloise (HELL-oh-ees) and her husband Peter Abelard is one of the saddest stories of Western history. Heloise was born about 1100 AD. (This was just a few years after the Norman Conquest). When Heloise was a young woman, about twenty years old, she lived with her uncle Fulbert. Fulbert worked for the Catholic church. His niece Heloise was known for her scholarship and her love of learning.

When the scholar Peter Abelard rented a room in Fulbert’s house, Heloise got him to be her teacher. Abelard was a very good teacher. He came to Paris as a young man and taught classes at the new Christian church school there. He used logical methods to try to answer difficult questions about what God was really like. Students came from all over Europe to hear him lecture. At this time he was about forty years old (He was born in 1079 AD.)  He fell in love with Heloise. But she was his student. He should not have made her his girlfriend too.

When Heloise got pregnant, Abelard wanted to marry her. At first she refused, because married men were not allowed to be churchmen, and so they could not be teachers. He was such a good teacher, she didn’t want him to have to stop.

The couple got married

But if Heloise were not married before the baby came, she would be disgraced herself. There was no way to get an abortion then. So Abelard insisted on marrying her. Finally they got married secretly. They told Heloise’s uncle Fulbert, but no one else. 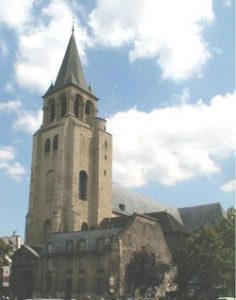 But after the marriage, Fulbert told people about it anyway. Heloise was very angry that her uncle had betrayed her secret. She denied being married. Abelard helped her move to an abbey where she would be safe from her uncle’s anger.

The lives of medieval nuns

But Fulbert thought Abelard was trying to get rid of Heloise. Then he was really angry. Fulbert hired men to follow Abelard, beat him up and cut off his private parts. Abelard almost died. When he got better, he couldn’t be a teacher anymore (because he was married). And he couldn’t be a husband anymore (because he had no private parts). So he retired to a monastery, and didn’t teach anymore, and never saw Heloise anymore either.

But Heloise never married anyone else. Because Abelard wanted her to, she became a nun. Apparently her family raised the baby. (Heloise and Abelard named the baby Astrolabe.) But her whole life, Heloise hated being a nun. She missed being married and out in the world.

Abelard and Heloise wrote letters to each other all through their whole lives. Eventually Abelard started a convent (a home for nuns), and Heloise became the abbess of the convent. Abelard died in 1142 AD, when he was 63, and Heloise died twenty years later, in 1164, when she was 63.

We would still see this as a crime today, as Fulbert did. Abelard was a lot older than Heloise, and he was her teacher. And he really messed up her life (and his own, as it turned out).

Bibliography and further reading about Heloise and Abelard: