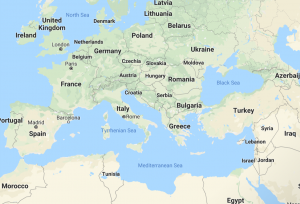 Bulgarian history – a map showing where Bulgaria is

When did the Bulgars arrive?

All through the early Middle Ages, groups of Slavs invaded Thrace from the north, and the Roman Emperors tried to fight them off. But in the late 600s AD, a different group of people invaded. These were the Bulgars. They were Turkic speakers from further east, in what is now Ukraine. Neither the Slavs nor the Roman emperor, Constantine IV, could fight them off.

Who were the Slavs?
Central Asian history
Constantine IV and Justinian II
The Early Middle Ages

The Bulgars’ leader,  Khan Asparukh, took control of the area and started his own country, Bulgaria. There weren’t that many Bulgars, but they ruled the country. Their Slav and Thracian subjects had to put up with it.

Khan Krum fights the Romans under Nicephorus I – Bulgarian history

To show that Bulgaria was a real country, their ruler Khan Krum published a law code about 800 AD. Krum also fought off a Roman invasion and killed the Roman emperor, Nicephorus.

Gradually the Slavs and the Bulgars married each other and became one people. The Bulgars stopped speaking their Turkic language and started to speak Slavic. In 864, under Boris I, the Bulgarians became Christians. But the rich people still pushed everybody else around and made them poor.

In the Roman Empire

About 1000 AD, the Bulgarians lost a lot of battles to the Russians, the Hungarians, and the Romans. They became part of the Roman Empire again, under Basil II. Basil, and later Roman Emperors, left the rich Bulgarians in power and left everybody else poor.

By 1185, the Romans had gotten weaker, and the Bulgarians fought for their independence. For a while, they were an independent country again. Their rulers married the rulers of the Roman (Byzantine) empire. But the rich rulers still treated everyone else very badly. One of the poor people, a pig-keeper called Ivaylo, led a revolution against the rich rulers in 1277. He made himself emperor for a while. Ivaylo tried to fight off the Mongols, but soon the Mongols took over Bulgaria. They ended up killing Ivaylo.

Bulgaria and the Ottoman Empire

Then in the 1300s, the Black Death killed a lot of people in Bulgaria. Bulgaria was so weak that it fell apart into several small countries that were always fighting each other.

What was the Black Death?
Medieval medicine and doctors

So the Bulgarians could not defend themselves when the Ottomans invaded. In 1396, Bulgaria became part of the Ottoman Empire. Some people converted to Islam. The ones who stayed Christians had to pay heavy taxes to their new rulers.