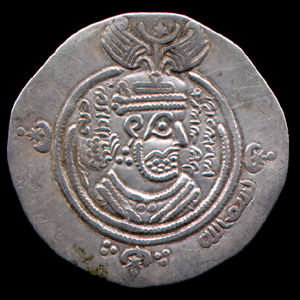 When was Constantine IV?

Constantine IV took over as Roman Emperor when his father Constans II died, in 668 AD. It wasn’t a great time to be emperor.

The Abbasids were gradually taking over most of the eastern Roman Empire. Attempts to retake the western part all ended in failure. But Constantine IV was a strong and sensible emperor. In 679 AD he successfully defended Constantinople from its first Abbasid attack under the Caliph Mu’awiya.

Who were the Abbasids?
Medieval Islam articles

Constantine also tried to push back the Bulgars. He didn’t succeed, and they established Bulgaria. Bulgaria is still there today, but at least their settlement with Constantine IV meant a lasting peace.

But Constantine IV died at 33. He left his 16 year old son, Justinian, to succeed him. Justinian II was smart and ambitious like his dad. But unfortunately, like his great-grandfather Heraclius, Justinian apparently suffered from mental illness.

Challenges and disability in history

His paranoid persecutions led to a revolt in 695. The rebels cut Justinian’s nose off and slit his tongue before they banished him. 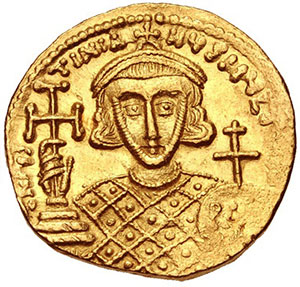 Justinian II on a gold coin from his second reign

The rebels chose a new Roman emperor: a mercenary soldier named Leontius. Unfortunately he wasn’t very good at it. Mainly he lost Carthage to the Abbasids in 698. When that happened, his troops mutinied and replaced him with another soldier named Tiberius.

Tiberius did better, but then Justinian escaped and returned from exile. He killed both Leontius and Tiberius. But Justinian was just as dangerous now as before, murdering and torturing people all the time. In 711 AD another group of rebels killed him, along with his 6-year-old son Tiberius. That ended the dynasty of Heraclius. Soon Anastasius II was the new emperor.

Learn by doing: making an icon
Go on to Anastasius II

More about Constantine III
The Abbasids
Go on to Anastasius II
Quatr.us home